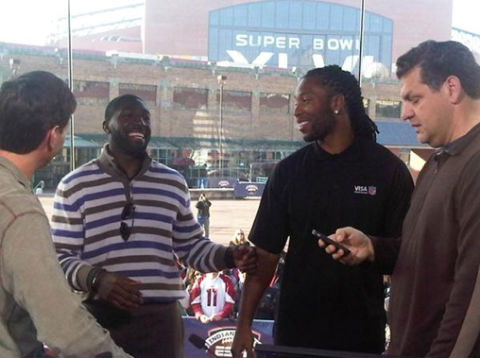 Green Bay Packers receiver Greg Jennings, like the rest of his teammates, has nothing to do this week. So, he’s taking in the Super Bowl festivities.

He also appears to be getting the celebrity treatment, but I guess that’s what happens when you put the team on your back, doe. Jennings did something or other for Coke, appeared on Mike and Mike, had dinner with Arizona Cardinals receiver and training partner Larry Fitzgerald, went to some parties, hung out with LL Cool J after watching him perform and met Spike Lee.

Oh, and lest I forget, he also hung out with Jared Fogle, which is totally sweet. One piece of advice, though. Maybe don’t throw up the victory sign every time you take a photo with someone who’s famous. It gets a little repetitive.

Anyway, looks like a pretty good time in Indianapolis. Too bad you’re not playing in the game huh, dick?

Super Bowl Preview: It’s All About the Giants