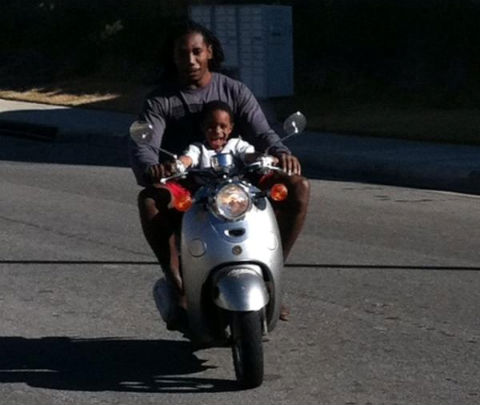 Green Bay Packers cornerback Davon House didn’t get much playing time his rookie season. In fact, he played in only two games and registered only one tackle.

With a full offseason program, he could contribute in 2012, though. The Packers may need him to. Both Pat Lee and Jarrett Bush — two guys ahead of him on the depth chart — are free agents.

This all depends on House not doing something stupid and injuring himself in the offseason, of course. We put the chances of that at about 50/50 right now.

Yesterday, House was wheeling around on a moped with his nephew. His wife Leatricia tweeted the following message with the photo above.

First of all, no man drives a moped, but that’s another issue entirely. The important question here is, what the hell is a guy the Packers may need to rely on heavily next season doing on a moped, motorcycle or any other sort of motorized bike?

Did no one learn anything from that idiot Ben Roethlisberger?

Previous Article
Packers Will Get Nothing For Matt Flynn
Next Article
Marisol González: Best Thing About The Super Bowl [Photos]