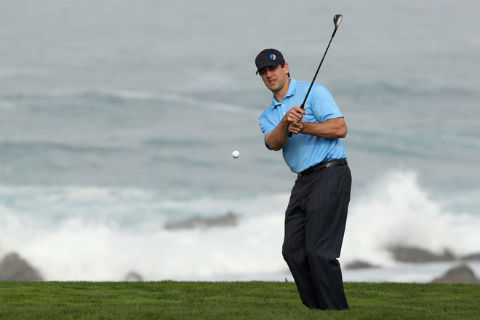 Green Bay Packers quarterback Aaron Rodgers is one of the celebrities participating in this week’s Pebble Beach Pro-Am, where he’s paired with D.J. Trahan.

As of this afternoon, the pair were at -4 on the day, which put them in a tie for 35th place. Probably not the showing Aaron wanted, but that’s not really any different than the playoffs, is it?

The focus at the event has been on Tiger Woods and his partner, Dallas Cowboys quarterback and Wisconsin native, Tony Romo. They’re not faring much better than Trahan and Rodgers, sitting in a tie for 23rd as of Friday afternoon, despite the fact Romo is supposedly a scratch golfer.

The outcome of the Pro-Am isn’t terribly important to us, but we were curious if Rodgers looks like he knows what he’s doing on the course. Judging by these photos, he does.

We threw in a bonus photo of Romo and Woods because we think we’ve just discovered “Romo Face.” See what you think.

Thanks to Jennifer for sharing.