by Andrew Chitko
in Uncategorized
1 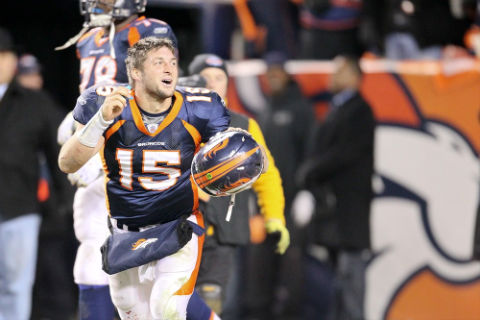 After a brilliant set of predictions in the NFL Wild Card round last Saturday, I followed it up with an equally awful Sunday and find myself at 2-2 on the postseason.

Let’s take a look at what I personally view as one of the most highly-anticipated weekends of NFL football ever, starting with Saturday’s games.

New Orleans Saints vs. San Francisco 49ers — Candlestick Park — 4:30 p.m. (EST)
Wow. Nothing like easing into things with the most compelling match-up of this amazing weekend. Although every playoff game comes with a certain amount of intrigue and unpredictability, I feel like this game is the epitome of could go either way. And that goes for who wins the game, what kind of game it is, the number of points scored, and so on. It’s the unstoppable force versus the immovable object and several other cliches not worthy of print.

The Saints are an offensive juggernaut. The 49ers are a defensive assassination squad. The Saints have arguably the best offensive personnel in the game today and the 49ers play with an aggression and violence that always keeps them competitive. These are the facts and they are undisputed.

I believe the number of grass stains on Drew Brees’ white jersey will be a clear indication of how this game plays out. The 49ers must get consistent pressure and take the mantra that fueled the Saints to a Super Bowl two years ago — hit the Hall of Fame quarterback! Even if it’s necessary to take a 15-yard penalty or two in the early going, they need to speed up the clock in Brees’ head and hit him.

In last week’s Wild Card game against the Lions, Brees showed his willingness to make less-than-optimum decisions in the face of pressure. He does not have the mobility nor the arm strength of Aaron Rodgers and he’s not used to being hit. If the 49ers can get some pressure and Brees floats a couple softballs up like he did versus the Lions, I guarantee the 49ers will make him pay. The Niners also don’t miss tackles and are better equipped to take the big play away than any team in football.

The Saints are totally capable of lighting up any defense in the league, but they’ve been much less impressive on the road and haven’t faced a defense like this one. 49ers quarterback Alex Smith has been serviceable at times, but has struggled versus the blitz, while the Saints’ Gregg Williams is one of the most aggressive defensive coordinators and will bring it. I could go on and on and on about the matchups.

When all is said and done, I don’t think the 49ers can put up enough points. Even if they hold the Saints to something like 21 points, can they muster enough offense to make that good enough to win?

Whatever happens I hope these teams kick the ever-living crap out of each other, leaving a battered and weary team coming in to face the Packers in the NFC Championship game.

Denver Broncos vs. New England Patriots — Gillette Stadium — 8 p.m. (EST)
So I said some less than stellar things about Tim Tebow and the Broncos last week. I admit it and am glad to take my medicine like a man. Granted, I didn’t expect the typically vicious Steelers’ defense to play as poorly as they did. James Harrison looked lost playing a soft read-and-react style and usually reliable cornerback Ike Taylor gave up more yardage in one game than he had in the previous 10 games combined. Tim Tebow doubled his production of typical games by making six big plays instead of three, and the Broncos defense took advantage of a hobbled Pittsburgh offense and were able to shock the world in overtime.

The Patriots laid out the blueprint to beat the Broncos earlier in the year, but the Steelers didn’t follow it. After Denver had some early success in their last meeting, New England adjusted and ignored every option fake and simply attacked and hit Tim Tebow. The plan worked perfectly. The Broncos running backs were unable to take advantage of the Patriots’ commitment to stop the quarterback, and Tebow turned the ball over.

I’ve always admired Mike Tomlin, but the Steelers were simply out coached last week. Although the Broncos will have some success against the usually porous Patriots defense, Bill Belichick and New England will make enough defensive adjustments to limit Tebow’s success, and their offense will put up enough points to keep the Broncos at arms length for much of the second half.