No, That’s Not Zach Galifianakis You Morons 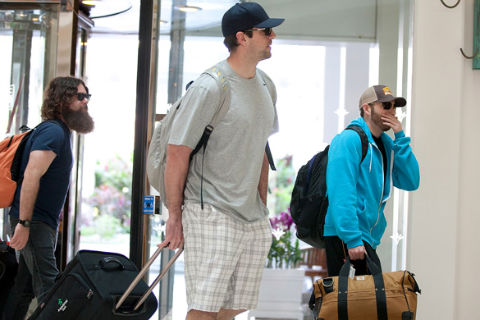 You’d think the people who write for NFL.com would have a little sense or perhaps even know a little about the players who play in the league they cover. It’s also the same league that pays them.

You’d be wrong, though.

Green Bay Packers quarterback Aaron Rodgers arrived in Honolulu for the Pro Bowl yesterday with his entourage in tow. The NFL.com people were there snapping pictures as players arrived. One of those pictures is above and was accompanied by the headline “Rodgers arrives … with Zach Galifianakis?”

Anyone who’s followed Rodgers knows the dude behind him is his childhood friend and partner in his record company, Suspended Sunrise Recordings, Ryan Zachary. Here’s what the rocket scientists at NFL.com were pondering, though.

You can check out a photo gallery of Tuesday’s player arrivals, the highlight of which was Packers quarterback Aaron Rodgers and his entourage. I’m still trying to get confirmation on whether or not the person pictured above, trailing Rodgers, is actor Zach Galifianakis.

Yeah, basically, they must think any dude with a beard and longer-that-normal hair is actor Zach Galifianakis of The Hangover fame. Although there may be a slight resemblance, anyone who’s seen a Galifianakis movie would know that’s not him.