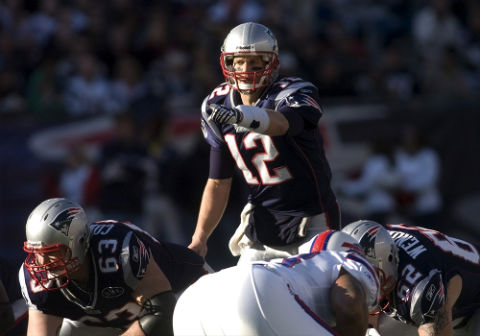 Baltimore Ravens at New England Patriots — 3:05 p.m. (EST)
As the Green Bay Packers were getting dismantled before our very eyes within the friendly confines of Lambeau Field, there were a lot of Patriots’ fans nodding quietly, feeling our pain, and remembering their own pain. As all great football teams have celebrated momentous wins, they have also suffered humiliating losses. Sometimes they are so baffling that they make us shake our collective heads in disbelief. The Packers know that feeling all too well, as do the mighty Patriots.

I can recall wandering through all the tailgaters outside University of Phoenix Stadium as I was preparing to watch the Packers-Cardinals Wild Card game in early 2010 and heard the murmurings that the Ravens were beating the hell out of New England… and in Foxborough. It all seemed quite shocking at the time, but looking back on that situation, it was a minor upset at best.

With Wes Welker out, guess who the leading receiver was for the Pats on that day? Nope… not Randy Moss. Kevin Faulk and Julian Edelman tied with six catches apiece. The leading rusher was also Faulk.

Although we’ll never fully know and understand the implications of Spygate and how much that contributed to the Patriots dynasty, no team has been able to have such long-term success while constantly adapting and changing appearance like a chameleon. In two years time, the Patriots have an entirely different offensive look. Of course Tom Brady is still in place, but with additions like Ben Jarvis Green-Ellis and Danny Woodhead, New England can switch from a power running game to a Darren Sproles-esque attack and hurry-up passing game, which they often do in a consistently inconsistent manner.

And when several teams in the NFL latched on to the fact that having a big, fast, soft-handed, able-bodied tight end was instrumental to success, Bill Belichick took it a step further and got himself two in Rob Gronkowski and Aaron Hernandez. Belichick loves his new toys and how versatile they are. He got creative and gave opposing coaches even more to think about by successfully installing Hernandez as a running back against the Broncos.

The Ravens are a touchdown underdog in this game, but I think they have a good shot if they can live up to their ability to shut down opposing tight ends. So far on the year, the Ravens have only given up an average of  41.6 yards per game to tight ends, facing seven of the top 20 tight ends in football in the process. They’ve never faced a two-headed monster like this though. Throw Welker in the slot and the Ravens might have a long day in front of them. In stating the obvious, the Ravens must get to Brady.

On the Ravens offensive side of the ball, Joe Flacco can’t get any respect. If he wants to start, then he has a major opportunity in facing a suspect Patriots defense. As usual, Baltimore will focus on getting Ray Rice going and hope to get Flacco on track in the play-action game. He’ll look for Torrey Smith deep and rely on Anquan Boldin to move the chains. Will Flacco be Flacco? Is it time for him to take the big step?

Although part of me feels like the Patriots are destined to fall at the hands of a superior defensive team like the Packers and Saints did, I think Belichick will have his defense up for this and they’ll answer the bell. It won’t solve every defensive malady, but aggressive pursuit and all-out effort often hide a lot of deficiencies. The Patriots got a perfect draw in facing the Denver Broncos last week, but defensively they were flying around out there from start to finish and were imprressive. If they give a similar effort and are assignment sure on the defensive side of the ball, I see the Pats in the Super Bowl again.

New York Giants at San Francisco 49ers — 6:30 (EST)
It’s not exactly the preview we were hoping for is it?

With all the talk of the Packers and Saints blazing a collision course to the NFC Championship game it’s almost fitting that it comes down to this. The two best defensive units in the NFC will take center stage as the battle-tested New York Giants and the rags-to-riches San Francisco 49ers clash.

This is a really tough matchup. Both teams are flying high and at the top of their games. The Giants are probably the most well-rounded team left in the playoffs, capable of winning any kind of game versus any kind of opponent. I’m continually being proven wrong (in my own mind), as Eli Manning succeeds and advances his game. With each passing effort, gone are the memories of Eli chucking up prayers and throwing into triple coverage. Yeah, he’ll still give you a chance to pick one off on occasion, but this is not even the same quarterback that led his team to a Super Bowl win against the undefeated Patriots. This Eli is so much more confident and seasoned. He’s been there and done that and there is no game too big for him. His pre-snap reads are right up there with the best in the business and he has arguably the most viable wide receiver threesome in the game.

When thinking about the San Francisco 49ers, the first word that continually enters my mind is violent. I’ve used it before and I’ll use it again. The 49ers defense is about as violent as you can be not to be considered dirty. When Pierre Thomas got knocked out by Donte Whitner last week, it set the tone for the rest of the game. It’s not to say the Niners went on to completely stifle the Saints offense, but they created turnovers, made tackles, and only got beat a few times by an all-world offense.

Alex Smith had a breakthrough performance last week in leading multiple fourth quarter comebacks versus the Saints. Hitting Vernon Davis in the end zone late, Smith not only delivered the dagger to the revered New Orleans team, but he also made himself millions of dollars in upcoming contract negotiations. Smith signed a one-year, $5 million deal prior to this season. If he can win this one at home his value will skyrocket. No pressure.

Last week, in writing my predictions, I went into them knowing who I was going to pick. After writing my breakdown of the Saints-49ers and picking the Saints, I realized just about every single detail that I wrote favored San Francisco. I asked how could the 49ers score and keep up, but never answered it with the obvious… turnovers.

This week I had no idea who I was going to pick in either game. I started out taking the Ravens and thinking the 49ers defense at home would be too overwhelming. I felt Eli Manning would never be as comfortable in the pocket as he was against the Packers, and Alex Smith would play well enough and take another big step toward being a world champion.

But after writing this, it opened my eyes to the fact that I must go with the Pats and Giants. New York has all the veteran leadership and audacity to win on the road again and yet, with that leadership, they’re relatively young and hungry. This is not an aging Pittsburgh Steelers squad that was a runner-up last year. This is a young, hungry, very healthy version of a similarly well-rounded team.

Who are the 49ers going to look to in the locker room for assurance? Who is the veteran leader on this team that has been through the fray? I know a lot of people used that argument against the Packers in the Super Bowl last year, but unless the 49ers defense is able to completely dominate this game then I see the Giants slowly pull away and stave off a late run. Poise will be the word of the day and the Giants will win that battle.