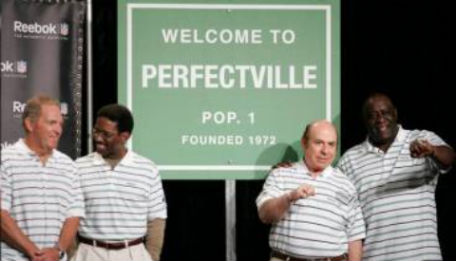 You guys are awesome!

Every year there’s an undefeated team in the NFL after the midpoint of the season, those old farts in South Florida suddenly appear out of nowhere like a deer crossing the freeway when it’s snowing.

“Hey, don’t forget about us! Remember? We’re the 1972 Miami Dolphins, the only team to ever go an entire season undefeated! Remember how awesome we were… [cough, cough]… [hack, hack]… Oh, shit, I’m going to die soon.”

I kid… to a certain degree. This bullshit is all manufactured by the media. No one would be talking about the Green Bay Packers going undefeated if some jackwagon from Yahoo! hadn’t asked cornerback Charles Woodson about it.

No. He’s going to say yes, I think we’re good enough to go undefeated. So after the Packers hit 8-0, it was out there. Once it was out there, you know you’d find some asshat from the ’72 Dolphins lurking behind a bush ready to jump out and say “Hey! Look at me!”

Well, maybe the media created that as a story, too. Hell, the football team in Miami hasn’t been good for a while, so the jerkoffs in Florida need something to write about and this gives them a story. Every year, when the last team loses, the guys from that ’72 team get together to celebrate.

So what do these old timers think? Former running back Mercury Morris doesn’t care if the Packers go undefeated, which is 180 degrees away from the usual line of thinking.

“I like [the Packers]. If they get to 10-0, which they probably will, I’m going to send [quarterback] Aaron Rodgers one of my CDs,” said Morris, a 1,000-yard rusher during the perfect season who has written a song about it he’ll gladly sell you for $19.72. “I have nothing but good things to say about the Packers. If they [end up] in our neighborhood, they’re a credit to the sport. They don’t have a bunch of guys out there who view themselves as entertainers.

“I didn’t like the way [the Patriots] came across [four years ago]. They thought it was just a formality [finishing 19-0] … They were too much in your face. They wanted you to bow down to them and kiss the king’s ring.”

Of course, not everyone agrees with Morris. Some of the players say they’ll welcome the Packers to the club if they’re able to pull it off, while others are holding on to former glory a little too tightly.

“They’re a great team. They won the Super Bowl last year with seven or eight of their [top] players not healthy. … But at this point, it still will be unbelievably hard [to go undefeated]. They’re mortal,” said former guard Bob Kuechenberg.

“Nobody could conceive an undefeated season would ever have been done by mortals. Only Zeus, Greek gods and [coach] Don Shula have been able to do it.”

Hell, the Packers are a long way away from perfection, but if they keep winning, the more crap like this you’ll get to hear.

Maybe you should get used to it.

Previous Article
A Tale Of Two (Or Three) Linebackers
Next Article
Around The League: Week 10 Review