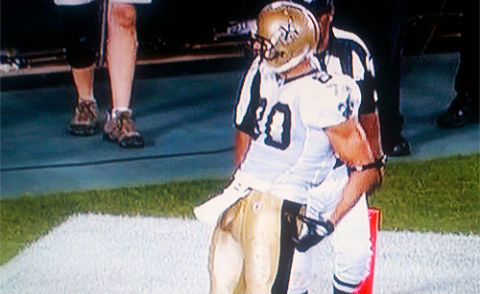 There were two notable instances when this occurred. In week one, New Orleans Saints tight end Jimmy Graham did the belt after scoring a touchdown. In last season’s divisional playoff game, Atlanta Falcons defensive end John Abraham did it after sacking Rodgers.

After Graham did it this season, one of my friends dropped the tight end in our fantasy football league, “out of principle,” he said, before adding a few choice words.

When Abraham did it, those of us watching the game together flipped out. Of course, the Packers were already winning and would go on to rout the Falcons. To think Rodgers didn’t take note is naive, but more on that later.

“I love it – I really do,” Rodgers said. “Jimmy Graham, the talented tight end for the Saints, did it opening night here in Green Bay this season. Different guys have done it from time-to-time. John Abraham did it last year in the playoffs.

“I got a text from somebody last season that said ‘You know you’ve made it when … you have your celebration copied.’ That whole celebration started as a device to taunt our own number one defense to get them to play harder in practice. And now it’s kind of evolved. It’s bigger than I ever thought it would be. It’s not something I do to garner a ton of personal attention, or as an intimidation or a taunting thing, it’s just more part of my goofy personality. It definitely has taken off.”

What is Rodgers going to say about people copying his celebration? I hate it and want to kill them?

He’s going to be polite and politically correct. Something tells us he really does love it, though, but not for the reasons he stated.

Something tells us he loves it because it motivates him even more. This has always been a guy who’s played with a chip on his shoulder. We know he takes note when another team says or does something he considers disrespectful, as he did with Roddy White’s comments after the Packers playoff win over the Falcons.

There’s no way he doesn’t do the same thing when someone else does the belt celebration. Look what happened to the Falcons after Abraham did it — the Packers opened the floodgates, Rodgers was next to unstoppable and the rout was on. Look what happened to the Saints after Graham did it — Rodgers played like a surgeon in the operating room and put the Saints in a hole they couldn’t get out of.