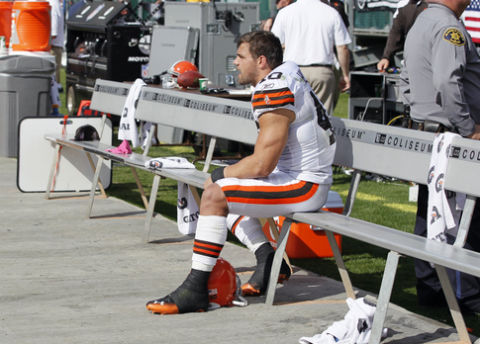 We seem to recall a time when people, including Aaron Rodgers himself, were pissed the Green Bay Packers quarterback lost out to Cleveland Browns running back Peyton Hillis for the Madden 12 cover.

Rodgers lost the fan vote to Hillis in the semifinal round. Hillis went on to beat Michael Vick for the cover.

Frankly, some of us didn’t give a shit about any of this because, 1. it’s only the damn cover of a video game, and 2. the Madden cover boy has historically met with terrible luck the following season. The dreaded Madden curse!

When Hillis won, we wrote some smart-ass post like “We’ll never hear from Peyton Hillis again.” Well, guess what? That’s not entirely far-fetched.

Hillis has 211 yards on 60 carries, a 3.5 yard average, and two touchdowns this season. His Browns are 3-4 and the big running back has missed the team’s last two games with a hamstring injury. He aggravated the injury in practice this week and will sit again in week nine.

It doesn’t stop there, either. Hillis, who’s been clamoring for a new contract all season, skipped a game because of strep throat earlier this season. Some suggested he decided not to play because of his contract. Others simply questioned his toughness. To top it off, Hillis also missed a charity event last week because of what he termed a miscommunication.

None of it looks good and it doesn’t look like Hillis, who’s making $600,000 in the final year of his rookie deal, will get a new deal anytime soon.

It still gets worse, though. Several of Hillis’ teammates decided to stage an intervention with him this week — not because he’s on drugs, but because he has a shitty attitude.

“I’ve never seen anything like it,” says one Browns veteran. “Last year, Peyton was such a positive, inspirational force on our team – but now he’s like a different guy. It’s like he’s in a funk that he can’t get out of, and it’s killing us, because we really need him. And we’ve told him that. But we’re at the point where we just don’t know what to do.”

Hillis says there’s no problem, but that’s obviously not the case.

Rodgers, meanwhile… well, you know all about what Rodgers has done so far this season.

Does anyone want to debate the legitimacy of the Madden curse again?