Nickelback To Play Packers/Lions Game? Not If Fans Can Help It 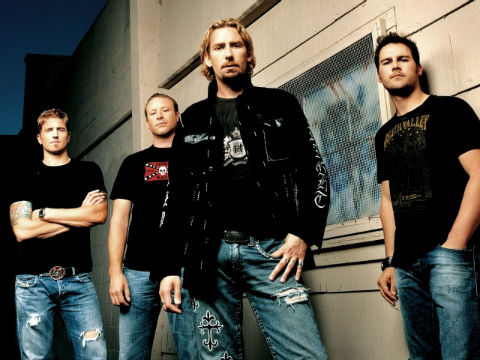 In all their infinite wisdom, the NFL has tabbed Nickelback to play halftime of the Detroit Lions Thanksgiving tilt with the Green Bay Packers.

Nickelback is probably the shittiest band make a major-label record in the past 20 years. All their shit sounds the same and it all sucks donkey balls. Plus, they’re a bunch of idiot poseurs. It’s kind of like when the NFL made the awesome decision to have the Black Eyed Peas play the Super Bowl halftime show. Nice choice… for people who are deaf and retarded.

I guess their selection process goes something like this.

“Hey, who is the biggest no talent bunch of losers we could get to play during halftime?”

“Of course they are. What else would they be doing? They’re fucking terrible and no one would pay to see them so there’s no way they’re touring!”

Well, thankfully, we’re not the only ones who consider this an outrage. Someone in Detroit has started a petition to get Nickelback booted from the halftime show. Here’s the reasoning, which we totally support.

This game is nationally televised, do we really want the rest of the US to associate Detroit with Nickelback? Detroit is home to so many great musicians and they chose Nickelback?!?!?! Does anyone even like Nickelback? Is this some sort of ploy to get people to leave their seats during halftime to spend money on alcoholic beverages and concessions? This is completely unfair to those of us who purchased tickets to the game. At least the people watching at home can mute their TVs. The Lions ought to think about their fans before choosing such an awful band to play at halftime.

I mean, the NFL couldn’t get anyone from Detroit to play halftime? Kid Rock? Bob Seger? Jack White and one of his 17 bands? Someone from Motown?

Any would have been a better choice than Nickelback!

Go sign the petition. Save Detroit from the embarrassment and save yourself from wanting to stab yourself in the ears.