Around The League: Week Eight Review 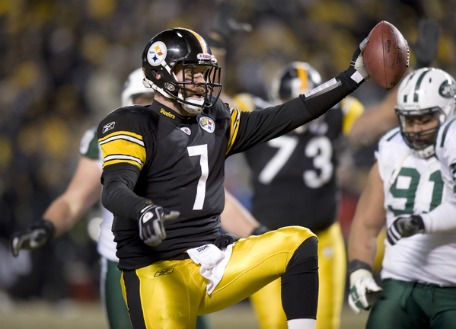 This idiot has the Steelers looking good.

We’ve reached the midpoint of the season. Here’s a look around the NFL after eight weeks. Let us know what you think.

The Weekly WTF?
Pittsburgh Steelers — The Steelers didn’t look like much at the start of the season, but they’ve been on a roll lately. Last Sunday’s win over New England was a statement. At 6-2, you could make a strong argument that Pittsburgh is the class of the AFC.

Kansas City Chiefs — The Chiefs looked even more atrocious at the beginning of the year than the Steelers, but they’ve now won four in a row to get to 4-3. In those four victories they shut out the Raiders and beat the Chargers, which puts them in a good position in the AFC West. Who would have predicted that when they started 0-3?

Philadelphia Eagles — They’re still only 3-4, but the Eagles are finally playing like everyone thought they would. They hung 34 on Dallas last Sunday and have winnable home games coming up against Chicago and Arizona before going to New York to battle the Giants on the 20th. In what’s proving to be a weak division, they still have a shot.

Cincinnati Bengals — We’re still amazed this team is winning. They’re 5-2 after stomping the Seahawks in Seattle. Rookie quarterback Andy Dalton still has room for improvement, but he’s thrown for 1,479 yards and nine touchdowns against seven interceptions. They also have the fourth-ranked defense in the league.

New Orleans Saints — Who the hell are these guys? They put up 62 on Indianapolis one week and then lose the winless St. Louis Rams by 10 the next? The Rams exposed the Saints defense by running the ball down their throat. Drew Brees wasn’t his usual stellar self, either, throwing only one TD against two interceptions.

3. Pittsburgh Steelers (6-2) — The Steelers are playing ball again. They’ve won four in a row and a showdown with Baltimore looms.

4. Buffalo Bills (5-2) — They could be the class of the AFC East. They have one of the best offenses in the NFL, led by Ryan Fitzpatrick and Fred Jackson.

5. New England Patriots (5-2) — So could they. A stretch of Giants, Jets and Chiefs will determine if Tom Brady can carry a team with an awful defense.

6. Baltimore Ravens (5-2) — Sunday’s matchup with Pittsburgh should tell us who the best team in the AFC North is. Their defense may not be dominant anymore, but the Ravens are pretty good when they hand the ball to Ray Rice.

7. Detroit Lions (6-2) — They demolished Denver, but did anyone expect anything different?

8. New Orleans Saints (5-3) — They may have been exposed in week eight, but they’re still the highest-scoring team in the league at 35 per game.

9 . Kansas City Chiefs (4-3) — Four wins in a row and the Chiefs suddenly look like the best in the AFC West.

10. New York Giants (5-2) — Only because we had to put somebody from the NFC East here. Has to be the worst division in football next to the NFC West.

5. Calvin Johnson — 47 receptions, 804 yards, 11 TDs, 17.1 ypc — He looks like he’ll challenge the single-season receiving touchdown mark and his yards per catch are awesome. Johnson is a big play waiting to happen.

2. Chris Johnson — 302 yards, 1 TD, 2.8 ypc — Took his money and stopped playing. His yards per carry average is atrocious and there’s question whether he should get benched for Javon Ringer.

4. Philip Rivers — 2,084 yards, 7 TDs, 11 INTs, 80.7 rating — Rivers has been one of the best players in the league over the last few years. He looks nothing like that guy now. He threw two picks on Monday and cost his team a game against the Chiefs.

5. Blaine Gabbert — 907 yards, 5 TDs, 4 INTs, 62.0 rating — He’s only a rookie, but Gabbert was pretty awful in his last two games. He hasn’t thrown for more than 100 yards since week six, he’s thrown two interceptions and only one touchdown in that stretch and he completed only 1/3 of his passes on Sunday.