A Tale Of Two (Or Three) Linebackers 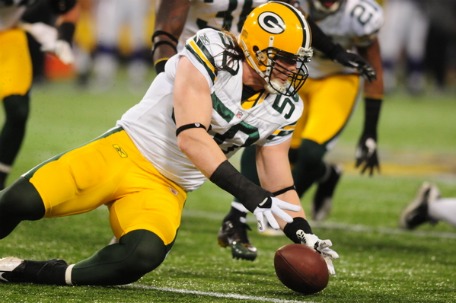 The Green Bay Packers threw some major money at both Desmond Bishop and A.J. Hawk in the past year, with Hawk getting a gigantic new contract just before the lockout.

Meanwhile, the team cut ties with Nick Barnett once the lockout ended and the former first-round pick signed with the Buffalo Bills.

Guess who’s performing the best. Not the guy getting paid the most.

Of the three inside linebackers, A.J. Hawk is easily performing at the most pedestrian level.

Through nine games Hawk has 48 tackles, 1.5 sacks, no interceptions and no forced fumbles. In other words, he’s back to being the slow-footed, non-playmaker he was before the second half of last season. At his current pace, Hawk will finish the season with 85 tackles and two sacks.

Bishop, on the other hand, is tearing it up in his first full season as a starter. He has 84 tackles (fifth in the league), five sacks and one forced fumble. He’s also been the most consistent playmaker among the Packers front seven. At his current pace, Bishop will finish with 149 tackles and eight sacks. Those numbers will probably get him to the Pro Bowl and might even make him an All Pro.

So what about that guy the Packers decided to let go?

Barnett is having a nice season for the Bills and certainly a better season than Hawk. He has 71 tackles, one sack, one forced fumble, two interceptions and one touchdown. More importantly, he’s helped a suspect defense become one that’s at least serviceable. Over a full season, Barnett’s numbers project to 126 tackles and three interceptions.

Obviously, the Packers released Barnett for a number of reasons. He’s older than Hawk and Bishop. He was making around $6 million a season. He has a history of injuries. He can be a distraction to the team.

Was it the right move? That’s debatable.

What isn’t debatable is both Bishop and Barnett are performing at a much higher level than Hawk.

You Knew We'd Hear From The '72 Dolphins Sooner Or Later