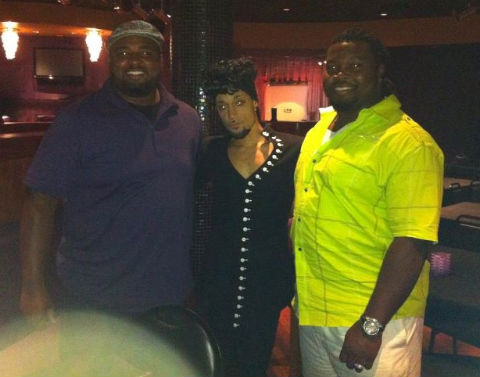 The Green Bay Packers are in the midst of their bye week and that means players don’t have to be at team facilities this week.

They can do whatever they want during their free time, which, hopefully doesn’t include smoking meth in a dark closet. So what did defensive end Ryan Pickett decide to do?

Go to Vegas and catch Purple Reign — The Prince Tribute Show at… wait for it… Hooters Casino! Pickett was there with current Seattle Seahawks and former Packers defensive lineman Colin Cole.

Oddly enough, the Seahawks actually have a game this week. Perhaps even more odd, is Pickett is ultra conservative. We know it’s not a strip club, but still think it’s funny he was in Hooters Casino.

Oh, and splurge for a real Vegas show, guys!