Tim Tebow Gets Tebowed After Sack 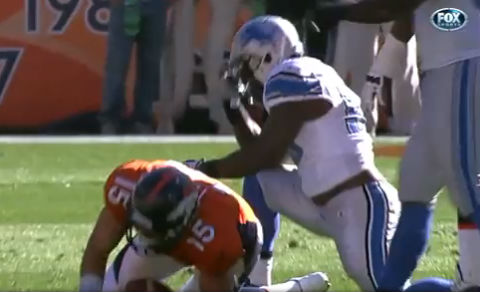 While the Denver Broncos were getting blown out by the Detroit Lions and folk hero Tim Tebow was playing quarterback awfully, he got sacked by Stephen Tulloch. Tulloch then did the whole Tebowing thing over the fallen quarterback.

If you don’t know what Tebowing is, it’s pretty much a dumber form of planking. People randomly drop to one knee with their elbow rested on their knee and head rested on their fist like they’re praying. Someone then snaps a picture and everyone has a laugh. It’s called Tebowing because its’s the post Tebow struck after the Broncos beat the Miami Dolphins last week.

Jesus Boy had to get his praying in. And now he’s an Internet joke.

That’s okay, though. He’s always been a joke to us.

By the way, Tebow was 4-for-15 for 37 yards halfway through the third quarter.