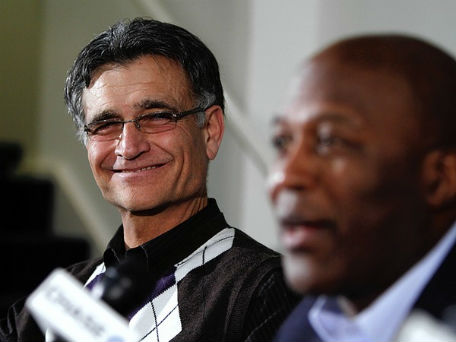 Face of the franchise?

The Chicago Bears are 2-3 and effectively out of the NFC North race a year after winning the division and advancing to the NFC Championship game.

The team did little to improve their roster in the offseason. General manager Jerry Angelo’s biggest moves were signing receiver Roy Williams and safety Brandon Meriweather, both of whom were released by their former teams.

Those moves were, in our eyes, laughable, considering Williams is long past his prime and Chicago’s other major weakness — the offensive line — was hardly addressed. Drafting Wisconsin tackle Gabe Carimi was the only move Angelo made to improve the sieve-like unit.

Not that we’re rooting for the Bears to get better, but Angelo is a buffoon and it’s beyond us how he still has a job. According to Pro Football Weekly, others are starting to wonder the same thing.

Much of the blame for the Bears’ struggles is being directed toward GM Jerry Angelo nine months after the team made a surprising run to the NFC championship game. The high-profile free-agent additions Angelo was counting on to upgrade positions of need — WR Roy Williams and FS Brandon Meriweather — have been huge disappointments. There are significant deficiencies in the supporting cast Angelo has built for QB Jay Cutler, who continues to take a beating behind a porous offensive line after being sacked a league-high 52 times last season. Fans questioning Angelo have company from sources around the league. Angelo, in his 11th season as the Bears’ general manager, does not acknowledge mistakes or hold himself accountable for the team’s weaknesses when given an opportunity to do so publicly, and it isn’t enhancing his declining credibility.

Something tells us if the Bears keep losing and Cutler keeps getting killed behind that offensive line, Angelo won’t last past this season.