Falcons Fan Gets Taken Down By Packers Fan [Video] 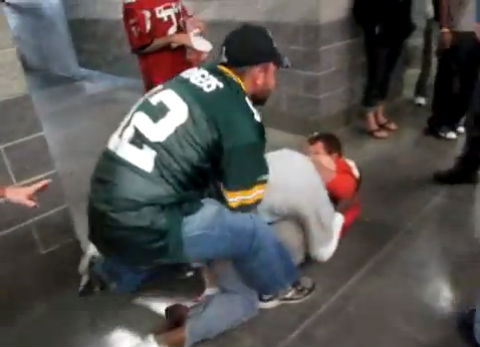 This video was shot a couple weeks ago after the Green Bay Packers handled the Atlanta Falcons in the Georgia Dome, but it was just posted yesterday.

What we’ve got here is… failure to communicate. If he wants it. He gets it.

Actually, this little scuffle seems to be about headgear. In one corner, we’ve got some Atlanta doucher who looks kinda like Matt Ryan wearing a Matt Ryan jersey. Hell, maybe it is Matt Ryan. This totally seems like something he would do, right? In the other corner we’ve got the only brother I’ve ever seen in my life wearing a cheesehead.

And the winner is… the beer companies, the Green Bay Packers and probably not Matty Ice.