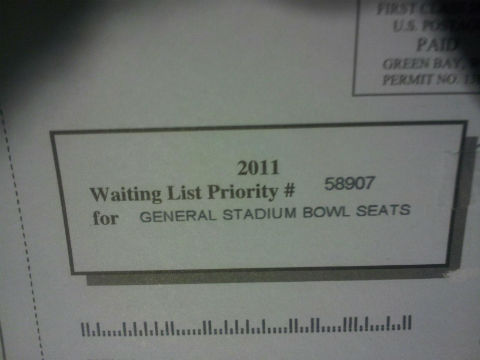 The Green Bay Packers have been sending out season ticket waiting list notices over the past week or so and guess what?

The waiting list is somewhere around 90,000 people and season tickets have been sold out since 1960. My father has been on the list since 1978 and he still doesn’t have season tickets.

So, each year, the Packer go through the formality of sending out notices to a bunch of people who are never going to get season tickets. A lot of photos have been popping up on Twitter and we grabbed some of them for you because, guess what?

You’re not the only one who’s never getting Green Bay Packers season tickets.

Fortunately, someday I will have season tickets. My old man is somewhere in the top 5,000 on the waiting list and family members can will their tickets to their offspring.

The rest of you can suck it!

Around The League: Week Five Review