Cerebral Football: The Onside Kick As A Weapon

I’m fast becoming a huge fan of Green Bay Packers coach Mike McCarthy and that hasn’t always been the case.

One of my biggest beefs with McCarthy was the number of mathematical and situational errors he made in the early part of the 2010 season. Without question, these decisions didn’t give the Packers the best opportunity to win certain games under their specific conditions.

But (for reasons that should be obvious) I’ve forgiven McCarthy. I even sent him a letter and promised an oath of loyalty and that starts now.

McCarthy’s use of the surprise onside kick is nothing short of tactical genius. An onside kick’s success rate is directly proportionate to the element of surprise, so one should choose the most unlikely spots in order to achieve maximum effectiveness.

Let’s look at McCarthy’s use of the surprise onside kick over the past couple years and why he’s been so successful.

2009 Wild Card playoff game at Arizona — Packers are down by two touchdowns in the third quarter versus a Kurt Warner-led offense that hadn’t been stopped all day. The upside for an onside kick was huge in this spot, while the downside was minimal. Anyone watching that game knew Arizona would score a touchdown regardless of field position. It was just that type of game. By executing a surprise onside in the third quarter, McCarthy gave his team a much better chance of succeeding than had he waited until later in the game when Arizona would be expecting it.

2010 versus the Patriots, opening kickoff — Brilliant! Why? Why would anyone be expecting it? It was a revolutionary call like New Orleans Saints coach Sean Payton’s onside call to open the second half of Super Bowl XLIV. Both were bold coaching moves that set the bar higher and made top football people take their critical thinking to the next level — that an onside kick isn’t just used in the fourth quarter.

Yesterday versus the Broncos, 50 seconds left in the first quarter — Even more brilliant! This is the first case I can recall where the surprise onside was used as a weapon by a team in the lead and expected to win. If you happened to TiVo the game and watched the play again, you’ll notice that not only were the Broncos not expecting it, neither were the announcers, the director, cameraman and fans. Now that’s a situation where an onside kick is going to succeed at a very high rate, especially when it’s Mason Crosby kicking.

Taking it to the next level?

With Crosby’s ability to seemingly hit a perfect and deceptive ball at will, should the Packers be doing this more often? Should the team push the boundaries further and consider even more bizarre spots to pull off an onside kick?

As long as these onside attempts remain a surprise, there are an awful lot of reasons to do it even more often. Given the success of the Packers defense in adverse situations it sure makes the downside smaller. With Crosby kicking the ball the way he does, the upside is even greater. 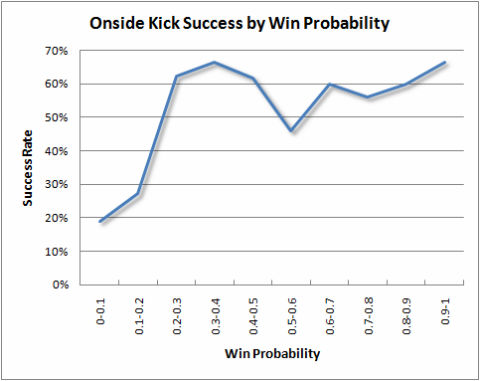 For those wanting to explore this more, here is an excellent article from AdvancedNFLStats.com. It goes deeper into the mathematical side of the equation and deserves to be read in full rather than paraphrased.

When will McCarthy strike with his secret weapon next? Probably when you, I and everyone else least expects it and that’s exactly the way it should be.

Tags:
Previous Article
Johnny Jolly: Back In The Clink
Next Article
Nelson Gets Three-Year Contract Extension