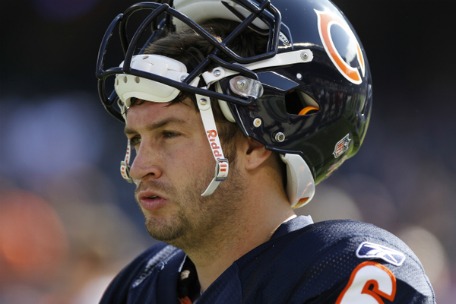 Hmmm... should I play or fake an injury?

The last we heard of Jay Cutler he was quitting on his engagement to Kristin Cavallari, who, let’s be honest, is way better than he could have ever hoped for. And frankly, that’s not saying much. She was on a reality show. She had a nice ass. She was famous for not really having ever done anything — kind of like Jay Cutler himself.

That’s because his offensive line sucks… just like it did last season… and the season before. [intlink id=”16″ type=”category”]Jerry Angelo[/intlink] is a master general manager, but that’s another story.

Cutler was a little sore earlier this week, which, we suspect is because he was hit 16 times in the Bears’ loss to the Saints in week two. As you might expect, when Cutler showed up at his press conference this week his vagina hurt.

Cutler was asked whether he could make it through a full season taking the number of hits he’s taken through the first two games. Not surprisingly, he did’t know, which is pretty much par for the course.

Hey, Jay Cutler is a good teammate. He doesn’t throw anyone under the bus.

Later in the press conference, Cutler would say this.

“Look, you all know I’m a total cunt and a quitter. My fucking vagina hurts right now and I don’t even know if I want to play against the Packers. If things get tough, I’ll probably fake an injury and sit out the second half. Okay? And look, if these shitbags could block, I might throw for 500 yards. But hey, let’s face it — they can’t and neither can I.”

On the positive side — for the Bears, anyway — they’re playing against a Green Bay Packers secondary that has allowed two 400-yard passing games. One of them was by rookie Cam Newton.

They also have Jay Cutler at quarterback and his vagina already hurts.

So, he’ll probably quit well before the playoffs, this year.

Previous Article
Aaron Rodgers Drives A Truck, Dammit!
Next Article
Cerebral Football: Why Teams Should Defer To The Second Half