Does Chastin West’s Boozing Mean He Made The Team?

After spending last season on the practice squad, West showed he’s ready to be an NFL receiver this preseason. The Fresno State product was 16th in the league with 153 yards receiving, highlighted by a five-catch, 134-yard performance against Arizona in week two.

The question is whether he’s good enough to make the Super Bowl champs.

The Packers are loaded at receiver. Seemingly, their top five is set, with rookie second-round pick [intlink id=”1616″ type=”category”]Randall Cobb[/intlink] occupying the No. 5 slot on the depth chart. Traditionally, the team hasn’t kept more than five receivers under [intlink id=”67″ type=”category”]Mike McCarthy[/intlink].

That could change with the emergence of West and undrafted rookie Tori Gurley, who’s also been impressive this preseason. It’s unlikely both players will make the active roster, but West didn’t seem too worried Friday night.

He was out with Cobb having drinks. 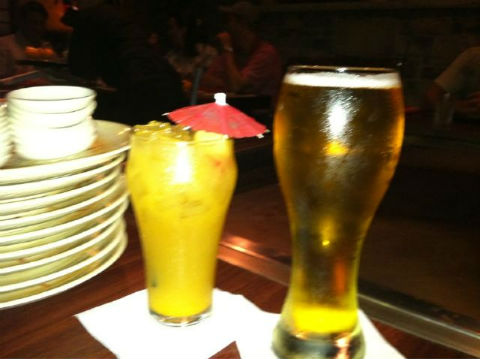 Obviously, he hasn’t been told to clean out his locker. In fact, maybe he’s been told the opposite and it’s a celebratory beer.

Those of use here at Total Packers would love to see West make the team. We’d love to see Gurley on the practice squad. Both players look like they can contribute and it would be a shame to see them end up in some shithole like Minnesota.

That being said, what the fuck is Randall Cobb doing drinking a girlie drink?

They make bourbon in Kentucky! Step up, man!