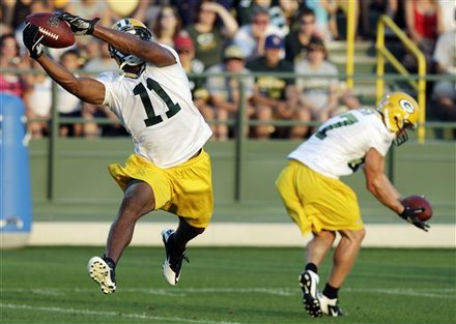 West didn't get a real shot to contribute in Green Bay.

[intlink id=”1238″ type=”category”]Chastin West[/intlink] was going to get his shot eventually.

Unfortunately it won’t come with the Green Bay Packers. The receiver announced Monday he was signing with the [intlink id=”281″ type=”category”]Jacksonville Jaguars[/intlink].

Despite a strong preseason, the Packers decided to try to stash West on the practice squad for the second season in a row. West showed quite a bit of improvement from his first to his second NFL season and many thought he did enough to make the active roster.

The team decided to stick with just five receivers, though, and after West cleared waivers, they re-signed him to the practice squad.

Practice squad players can be signed by other teams. Their current teams either have to add the player to their active roster or lose them.

West wanted a chance to play and the Packers decided not to make a play for him, even though they’ll have a roster spot when they put Nick Collins on injured reserve. West seemed to suggest via Twitter he didn’t think he got a fair shot with the Packers.

“I think a change of scenery is what we need sometimes to make things real. I just can’t wait to play again. It has been a long time coming”

The Jaguars currently have six receivers listed on their roster, but have some injury issues.