Breaking Down The Packers Practice Squad 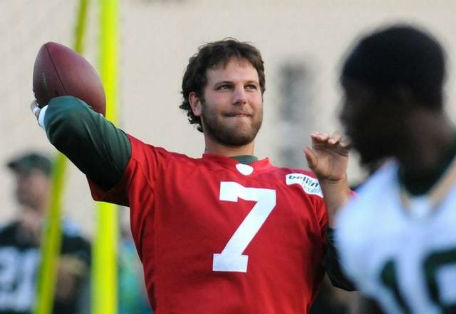 Harrell has to be disappointed he's not on the 53-man roster.

Since we were too busy getting drunk all weekend and didn’t do it earlier, we thought we’d take a quick look at the Green Bay Packers practice squad.

All of the players were with the team during training camp.

Diondre Borel, receiver, undrafted in 2011 — Borel was a quarterback at Utah State, but has the athleticism to play receiver. With a little seasoning, he may have a shot at an NFL roster.

Ray Dominguez, offensive lineman, undrafted in 2011 — Dominguez can play guard and tackle. The Arkansas product wasn’t bad during the preseason and could become a backup for the Packers in time.

Sampson Genus, center, undrafted in 2011 — The South Florida product has some long-term potential. He was a first-team All Big East selection in 2010. The Packers also probably needed to keep him around. After cutting [intlink id=”1071″ type=”category”]Nick McDonald[/intlink], Evan Dietrich-Smith is the Packers’ only other option at center and he’s a converted tackle.

Tori Gurley, receiver, undrafted in 2011 — Although his release wasn’t totally unexpected, a lot of people would tell you Gurley played well enough to make the team. His height (6′ 4″) gives him an advantage as a receiver and he blocked several punts during training camp. We’d be surprised not to see Gurley on the active roster at some point.

Graham Harrell, quarterback, street free agent in 2009 — The Packers were expected to keep Harrell on the active roster, but he got caught in a numbers game. They were lucky to get him back on the practice squad after a mostly solid preseason.

Brandon Saine, running back, undrafted in 2011 — Saine didn’t do anything in training camp to illicit comparisons to [intlink id=”584″ type=”category”]Ahman Green[/intlink], but he does have one thing you can’t teach — speed. He’s been clocked at 4.2 in the 40.

Chastin West, receiver, undrafted in 2010 — West was probably the 54th man on the roster. He made great strides after spending last season on the practice squad and looked good enough to be the Packers sixth receiver. Unfortunately, they decided to go with only five.