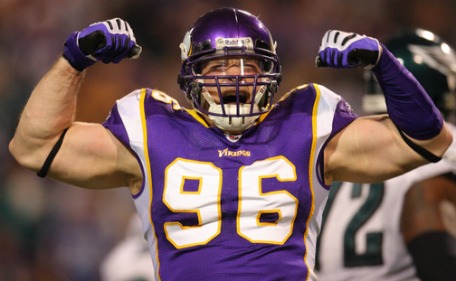 This will be his first year as a starter after four fairly undistinguished years as Ray Edwards’ backup. The Vikings let Edwards walk in free agency, handing the starting job over to Robinson, who has 13.5 career sacks.

What Robison may lack in production, he’s making up for in talk.

“I know there might be some Vikings fans that get mad at me for saying this,” Robison said.  “But I’m kind of glad they won the Super Bowl last year.”

We knew Robison was a mediocre football player, but we didn’t know he was a comedian, too.