Tale of the Tape: Preseason, Game One 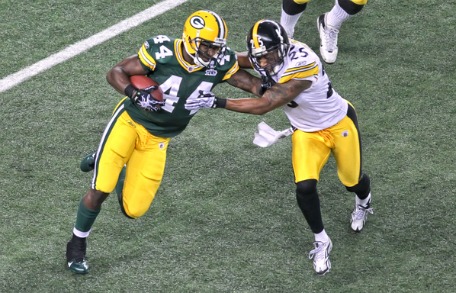 The Green Bay Packers will open their home schedule against the [intlink id=”174″ type=”category”]Arizona Cardinals[/intlink] at Lambeau Field tonight.

Several intriguing stories will continue to unfold during the game. Here’s a look at what the tape of the Packers loss to the [intlink id=”380″ type=”category”]Cleveland Browns[/intlink] in the first preseason game told us.

The battle for left guard
My initial impression was that no one on the offensive line had a great showing against Cleveland. I was wrong. [intlink id=”25″ type=”category”]Aaron Rodgers[/intlink] was well-protected on both series he played and could have worn a red jersey for as much contact as he saw. [intlink id=”84″ type=”category”]Matt Flynn[/intlink] was also adequately protected, though he frequently ran out of the pocket without reason. Ironically, the only series Flynn faced actual pressure was on his touchdown drive before the half. [intlink id=”1102″ type=”category”]Graham Harrell[/intlink] was not as well protected, but most of the issues, except for one big one, occurred on the right side of the line.

The left side, which featured [intlink id=”1613″ type=”category”]Derek Sherrod[/intlink] and [intlink id=”583″ type=”category”]T.J. Lang[/intlink] alternating for most of the game, was all but dominant. In fact, I’m not sure the Packers couldn’t have simply ran left all game long. Sherrod and Lang got a great push on nearly every running play. With the right side of the line getting collapsed on the same plays, the line reminded me of two opposing armies attacking by the same flank.

Surprisingly, Lang had the better of it at left tackle. He was only beaten once. Sherrod was beaten at least three times, including twice on Flynn’s drive before the half.

However, I gave Sherrod the nod in a close contest at left guard. Both players pass blocked exceptionally, but the bigger man had a little more push in the running game. This is only one game, but amazingly, I’m not so sure Lang shouldn’t be the future left tackle with Sherrod being the starting left guard. Sherrod struggled with speed rushers, which left tackles typically face, and his athleticism works beautifully with the demands of being an offensive guard. Imagine this guy pulling out for a lead block.

Randall Cobb
At times, [intlink id=”1616″ type=”category”]Randall Cobb[/intlink] looked like a starter playing against the second string. His first step is quick as advertised, allowing him to easily separate on inside routes. I didn’t see the run after the catch I wanted to, but all three of Cobb’s receptions were downfield and across the middle, which made it difficult. Cobb did all of his damage from the slot. He could kill a defense like the Bears, which likes to play man-to-man on inside routes. Donald Driver’s days in the slot are numbered.

Cobb was also solid on returns. He has the burst you look for and doesn’t allow the first defender to tackle him. Basically, he’s as advertised.

Cullen Jenkins’ replacement
[intlink id=”473″ type=”category”]B.J. Raji[/intlink], as expected, looked like a beast. He threw blockers around like blow-up dolls and got after the quarterback and running back Peyton Hillis. There’s no doubt Raji is going to be a better player than Jenkins was.

[intlink id=”1033″ type=”category”]Mike Neal[/intlink] also looked impressive: big, strong, and athletic. He got decent push on passing downs and was a factor on the few runs he saw.

[intlink id=”1042″ type=”category”]C.J. Wilson[/intlink] and Jarius Wynn were both practically invisible. Neither did anything to make me think they should be starting or rotated in regularly, even though both played against second and third stringers all game. It was actually a disappointing showing from Wilson, who was expected to be a factor this year. Again, it was only one game, but one of these guys needs to step their game up or the Packers are looking thin at the position.

ROLB
If you were disappointed in the defense, then keep in mind that Clay Matthews only saw four plays and never rushed the quarterback. In fact, all the OLBs were regularly dropping into coverage, rather than rushing the quarterback. As such, it’s kind of difficult to judge the outside linebacker position. [intlink id=”1058″ type=”category”]Frank Zombo[/intlink] appears to be the most assignment sure, while [intlink id=”1335″ type=”category”]Erik Walden[/intlink] had slightly better success as a pass rusher. [intlink id=”443″ type=”category”]Brad Jones[/intlink] did nothing to impress and the promise of his rookie season seems like a distant memory.

Grant vs. Starks
[intlink id=”1038″ type=”category”]James Starks[/intlink] looks like a stud. He’s stronger, more decisive in his cuts, and faster. If he can handle his blitz pick-ups and catch the football, he’s your starting running back.

[intlink id=”64″ type=”category”]Ryan Grant[/intlink] also appears to have regained most of his quickness and did well the three times he carried the ball. It didn’t hurt that Grant ran left where Sherrod and Lang were burying people. Grant could be an excellent combo-back with Starks. He could gain an edge by being more assignment sure than Starks. Regardless, both will get their share of carries, and with more push at left guard, I expect the running game to be better utilized this season.

Morgan Burnett
Burnett had an excellent game. He definitely appears to have taken a step forward this season, even though he really hasn’t had much time to do it. All this guy has to do is be assignment sure because he’s definitely an exceptional athlete.

It’s probably safe to say that with [intlink id=”162″ type=”category”]Nick Collins[/intlink] and Burnett, the Packers have the most athletic safety tandem in the NFL. Arguably, the 2010 Packers had the best secondary in team history. This secondary should be even better.

Graham Harrell made a couple questionable decisions, but he will be a better QB than Matt Flynn. The Packers should feel free to trade Flynn. Harrell has a quick release and a stronger arm than Flynn. Harrell doesn’t have Flynn’s habit of running out of the pocket after two reads, either. Sure, Harrell fumbled three times, but the first wasn’t his fault and it’s only preseason.

The disastrous play that almost got Harrell beheaded was a perfect storm of unfortunate events for the Packers. First of all, the defense ran a mad dog blitz even though the Packers lined up with a tight end and two backs in the backfield. If the Packers simply run straight ahead, the defense has no linebackers in the middle of the field to stop it. It was pure serendipity. Not only did Harrell not hand off, but he turned his back to the oncoming blitz to deliver the ball to his right.

Harrell could have directed his own protection by making it clear to Lang and Williams who they were responsible for pre-snap. Lang further opened the door to disaster by hesitating to block the right end who slanted hard inside across his face. Williams saw the hesitation and moved down to fill the gap. When Lang didn’t block the end, Williams was no longer in position to block either linebacker, who not only had a free run at Harrell, but also had a shorter distance to cover thanks to both blockers shifting inside.

Ultimately, this play resulted from poor communication. As long as Harrell came through unscathed, Packers coaches can consider this a prime learning opportunity.

For all the whining over the new kickoff rule, there were nine kickoffs in this game, and there was only one touchback — on the final kickoff of the night. The new rule forcing the cover team to line up only five yards off the ball clearly slows the unit, which allows kicks to be returned from deeper in the end zone.