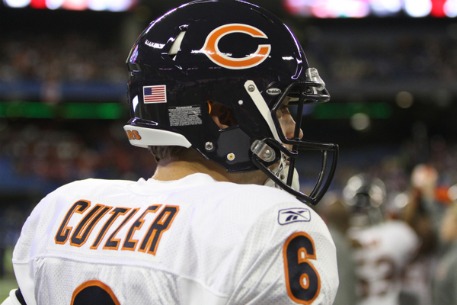 And yeah, I promise this will be the last post about Cutler’s love life today.

Anyway, OK! reported the pair were spotted together in Chicago this weekend. Apparently, neither the magazine or their source knew what the hell they were talking about.

We have it from a source in Chicago who’s familiar with the situation and here’s the real deal.

“The last time Kristin was in Chicago was for Fourth of July,” we were told. “Kristin just got back from Greece on Thursday night. On Friday, Jay was at practice in Bourbonnais. On Saturday, the Bears would have been getting ready for the preseason game against the Bills. From what I understand, they went back to Bourbonnais after the game, even though they had Sunday off.”

“Whomever thought this would be a good rumor didn’t take into account that football players are at camp, not hanging out with their girlfriends, wives, or exes.”

Unless someone can produce photographic evidence of Cutler and Cavallari together that’s clearly from Sunday, we’re going to say there was no meeting.