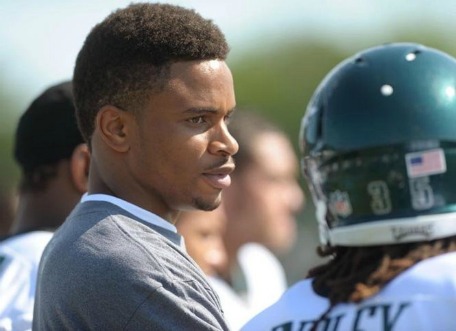 The [intlink id=”374″ type=”category”]Philadelphia Eagles[/intlink] have made some great moves this offseason and their team looks like a Super Bowl contender, but we all know how many Super Bowls are won in July and August.

Well, at least those of us who can read and write beyond a 10th-grade level do. So it should come as no surprise that some members of the Eagles have already handed themselves the Lombardi Trophy.

[intlink id=”199″ type=”category”]Tennessee Titans[/intlink] retread Vince Young, who the Eagles signed over the weekend and probably hope never steps on the field, called his new team a dream team.

When asked to describe the players that have been brought in and the group that is being assembled, Vince Young cracked a wide smile and simply responded: “Dream Team.”

“From Nnamdi [Asomugha] to [Dominique Rodgers-] Cromartie, to Jason [Babin] to myself,“ Young continued, “I know they are going to do some more things…It’s just beautiful to see where we’re trying to go.”

Of course, if Vince Young were worth a shit he wouldn’t have been dumped for a 35-year-old Matt Hasselbeck, but that’s probably neither here nor there.

Jason Babin, the defensive end Philadelphia signed last week, got in on the act, too. Babin compared the Eagles to the Miami Heat on Twitter, saying “I feel like we are the Miami Heat of the NFL.”

He then apparently realized how stupid that statement was and deleted it.

The Miami Heat didn’t win anything this year and everyone outside of Florida hated them, so good thinking, Poindexter.

Babin, mind you, recorded 12.5 sacks in his contract season. He had 17.5 in the previous seven years of his career combined.

The Eagles best moves were acquiring cornerbacks Rodgers-Cromartie and Asomugha, which will shore up a pass defense that was torched by [intlink id=”25″ type=”category”]Aaron Rodgers[/intlink] in the playoffs last season. They’ve also added Cullen Jenkins who, if he can stay healthy, should bolster the pass rush.

It will be fun to see what all of these superstars and sure-fire Hall of Famers can do against the Packers four and five wide receiver sets or whether they can stop [intlink id=”209″ type=”category”]Jermichael Finley[/intlink].

For now, we should take time to congratulate the Eagles for winning the Super Bowl of the offseason. It was a tremendous accomplishment we’ll surely all remember for a long time.

Now that we’ve taken care of that, we can get back to reality where the path to the real Super Bowl runs through Wisconsin.