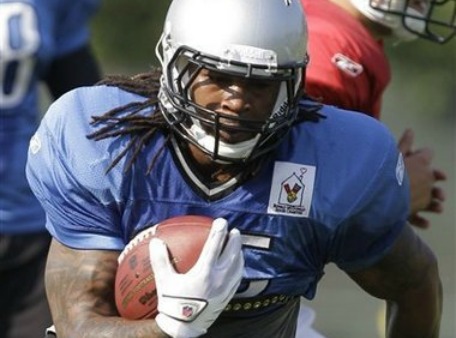 While it’s business as usual with the Green Bay Packers, things of great magnitude are going on around the rest of the [intlink id=”527″ type=”category”]NFC North [/intlink] today.

We’ll look to the east first, where the [intlink id=”126″ type=”category”]Detroit Lions[/intlink] lost a huge weapon. Running back Mikel Leshoure, a second-round pick, was lost for the season with a torn ACL.

“You could tell on the field, number one from the way he went down,” coach Jim Schwartz said. “On the field, there are no more tests that need to be done. He’ll have surgery very soon, probably tomorrow.”

Leshoure was expected to complement Jahvid Best in the running game by adding an element of power.

I wonder if anyone fell off the Lions’ hypewagon when Leshoure went down.

Down south, the [intlink id=”13″ type=”category”]Chicago Bears[/intlink] again demonstrated a bunch of morons are running the asylum.

After deciding not to re-sign their best offensive lineman, center Olin Kreutz, the team went out and paid Chris Spencer $6 million to replace him. Apparently, the coaching staff didn’t think much of that move.

The Bears announced their offensive line starters today and Spencer was not among them. Instead, guard Roberto Garza will snap the ball to [intlink id=”405″ type=”category”]Jay Cutler[/intlink].

“Unless the five starting linemen falter, there are no changes,” said line coach Mike Tice, cutting off a question about Chris Spencer possibly beating out Roberto Garza at center. “There’s no ‘competition.’ We have five guys in there and they’re the starters.  We’re going to stay that way until something proves me wrong.”

Finally, over to the west, the [intlink id=”35″ type=”category”]Minnesota Vikings[/intlink] continue to be a bunch of fuck-ups.

Quarterback Rhett Bomar was arrested for drunk driving on Sunday.

Bomar was on the practice squad last season. It was doubtful we would have made the active roster this season.

Now, he might not even make the practice sqaud.

It is, however, the Minnesota Vikings way.

Previous Article
Has Mike Neal Been Handed A Starting Job?
Next Article
Younger Matthews Gets Starting Nod In Philadelphia