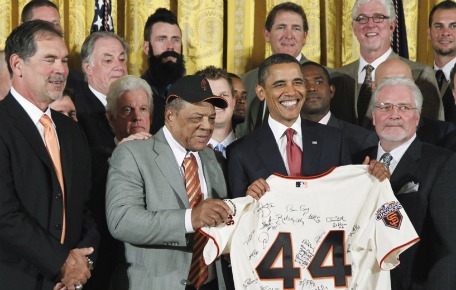 Obama welcomed the Giants on Monday.

The idiocy of the NFL lockout robbed the Green Bay Packers of the opportunity for the traditional post-Super Bowl White House visit, at least for the time being.

The organization hopes to change that, though… schedules permitting.

“We’ve since had some discussions, looking at whether we can find a date in August where the team could go down and visit the White House,” team president Mark Murphy said. “I hope we can make it. I think it’d be such a special and unique opportunity for our players.”

“I do realize that President Obama has more important things to deal with now than this.”

The Packers open camp Friday and have a short window to deal with things like free agency and signing their draft picks because of the lockout. Meanwhile, Obama is trying to iron out an agreement with a bipartisan Congress to deal with the nation’s debt.

We don’t suspect Obama, who’s a [intlink id=”13″ type=”category”]Chicago Bears[/intlink] fan, is going to be in any hurry to welcome the Packers, though.

What could perhaps be even more awkward is several players who were on last year’s Super Bowl squad will likely be playing elsewhere if the White House visit happens.