Packers Probably Won’t Have To Deal With Asomugha 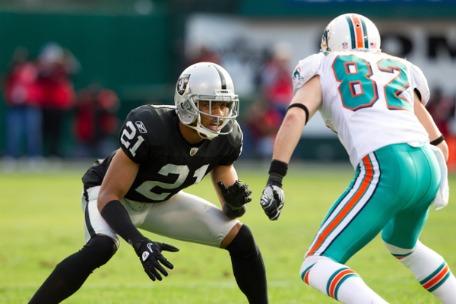 Asomugha = scary. Lions' pass defense = not so much.

Adding a top-tier cover corner like Nnamdi Asomugha to an up-and-coming defense like the one being assembled by the [intlink id=”126″ type=”category”]Detroit Lions[/intlink] could give the Green Bay Packers real trouble. Fortunately, they probably won’t have to worry about that.

Asomugha, who’s spent his entire career with the Raiders, will be the top free agent on the market when the NFL’s labor situation is resolved. There has been speculation that teams like the Lions and [intlink id=”275″ type=”category”]Houston Texans[/intlink], both of which have been terrible at defending the pass in recent seasons, will make a run at him.

Despite the obvious need, the Lions aren’t expected to pursue Asomugha because of the financial commitment.

Asomugha, who could command $18 million per year as the best available free agent, likely will be “too expensive” for the Lions, according to a team source.

Instead, the Lions will choose from the likes of Antonio Cromartie, Johnathan Joseph or Ike Taylor if, according to the Detroit Free Press, the price is right. They may even end up turning to someone like Drayton Florence and they’d like to re-sign free agent Chris Houston.

Cromartie, who played last season with the Jets, was once a top-flight corner and would still be a major upgrade for the Lions, but it’s questionable whether Taylor, who played in Pittsburgh, or Joseph, who was with the Bengals, are necessarily No. 1 cornerbacks. Florence, who played with the Bills, would be lucky to be a No. 2 on most teams.

The thought of Ndamukong Suh rushing the passer and Asomugha covering an opponent’s No. 1 receiver makes the Lions pretty scary.

The thought of Ndamukong Suh rushing the passer and Florence covering an opponent’s No. 1 receiver makes the Lions exactly what they’ve been over the past few seasons — the worst pass defense in the [intlink id=”527″ type=”category”]NFC North[/intlink].