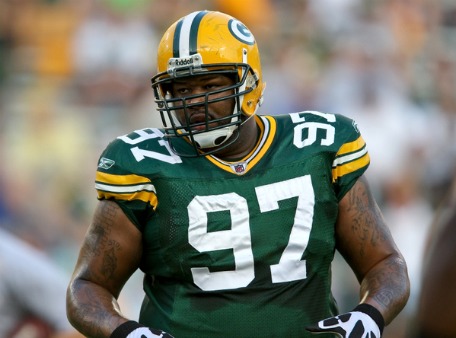 Jolly should get his walking papers when his suspension ends.

The Packers stood by Jolly while he was going through his first arrest for codeine possession and he rewarded them by getting arrested again for the same thing. Underwood did pretty much the same thing. After getting arrested for sexual assault last summer — an incident that resulted in a prostitution charge and a no contest plea — Underwood was arrested earlier this summer for disorderly conduct.

The Packers can’t make any personnel-related moves during the lockout, but former Packers beat writer and current Boston Globe scribe Greg Bedard, says the team will dump both players when the lockout ends.

Regardless of what happens in the case, Underwood, like Jolly, should never play for the Packers again. Or the phrase “Packer people’’ is worth about as much as the paper it was printed on.

The Packers won’t be losing much in either case.

They managed to win a Super Bowl without Jolly, who was out all of 2010, and Underwood made only 10 tackles in the 12 games he played in last season. He fell so far down the depth chart at cornerback, the coaching staff decided to move him to safety during the season.

Previous Article
Ryan Grant Still No. 1 On Depth Chart
Next Article
Packers Probably Won’t Have To Deal With Asomugha