That is to say, their organization is filled with douchebags from the top down.

Earlier this week, those douchebags announced a partnership with Marvel Entertainment.

Through an agreement that enables the Dallas Cowboys to license Marvel’s Super Heroes, the team will develop co-branded merchandise featuring Captain America, Spider-Man, Iron Man, Thor, and many other Super Heroes decked out in Cowboys’ team colors, logos and jerseys.

How such a partnership makes any sense is beyond me.

The Avengers, several of which are highlighted in the press statement above, were a crew of bad MF’ers who kicked considerable ass and flaunted abilities to be envied by all.

The Dallas Cowboys are a bunch of underachieving pricks with an owner whose ego is bigger than the state of Texas that feature abilities that get them nowhere in the playoffs.

In fact, they’re a lot like the Bizarro version of The Avengers.

Check out the gallery of shirts, a couple of which are already available and be sure to beat up anyone in your neighborhood wearing one.

My favorite is the one proclaiming “Cowboys Have Super Fans.” 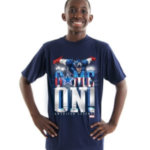 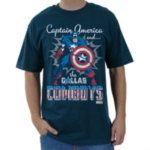 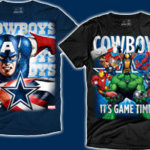 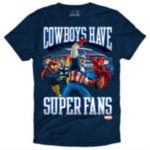 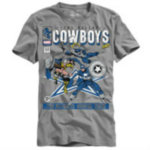 Previous Article
Field Of Dreams 2: NFL Lockout [Video]
Next Article
Like Rest Of Us, Nick Barnett Needs Something To Do