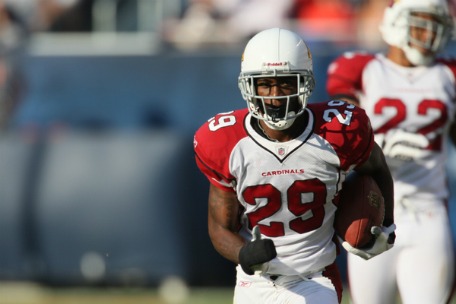 Although teams can’t begin signing free agents until Friday, this is the third day they could negotiate with them. Several clubs took advantage and reached agreements with players and my god am I exhausted.

The Green Bay Packers sat on the sidelines and watched Daryn Colledge sign with the Arizona Cardinals and James Jones run a fly pattern to Minnesota. Word is, the Packers are out of the running for Jones.

Here are today’s developments that could impact the Packers’ quest to repeat in 2011.

We will update as more come through, with the latest at the top.

Just like that, the Saints have a replacement for Reggie Bush. He’s former San Diego third-down back/return man Darren Sproles.

Sproles got a four-year deal from the Saints.

He’ll fit nicely in New Orleans and will make some big plays.

The Texans have signed cornerback Johnathan Joseph, who was considered the second-best corner on the market next to Nnamdi Asomugha by many.

Houston was in dire need of an upgrade at cornerback and they were in the Asomugha picture.

It looks like the top free agent in this year’s class will either end up with the Jets or the 49ers, unless someone else becomes involved.

The Bears just traded tight end Greg Olsen to the Panthers for a player and a pick.

Ochocinco probably moves to the top of the line as the Patriots most dangerous receiving threat.

You remember Albert Haynesworth, don’t you? Before he became a big, fat, useless piece of shit in Washington, he was one of the game’s most dominant defensive tackles.

The Patriots are betting he’ll return to his pre-Washington form. They gave up a fifth-round pick in 2013 for Haynesworth and the Redskins rid themselves of a headache.

Patriots coach Bill Belichick is known for taking on problem players and getting them to perform. See the work he did with Corey Dillon and Randy Moss.

The Miami Dolphins made the other unexpected move of the day, acquiring running back Reggie Bush from the [intlink id=”234″ type=”category”]New Orleans Saints[/intlink].

Compensation wasn’t announced, but Bush negotiated a new two-year deal with Miami for just under $10 million. He was scheduled to make more than $11 million in 2011 with New Orleans, which is why the Saints had to move him.

Bush will have more of a featured role in the Miami backfield.

Both of Miami’s backs from last season, Ricky Williams and Ronnie Brown, are free agents.

The Cardinals completed the long-rumored trade with Philadelphia, giving up cornerback Dominique Rodgers-Cromartie and a second-round pick. Kolb also agreed to a five-year, $63 million contract with $20 million guaranteed with Arizona.

The Eagles, who now have one of the best cornerback tandems in the league with Rodgers-Cromartie and Asante Samuel, look like the class of the NFC East and could be nipping at the Packers heels come January.

While the Kolb deal looks good, this is the type of deal you regret. Babin had 12.5 sacks last season in his contract year.

He had a grand total of 17.5 in his first seven seasons. At 31, Babin isn’t likely to duplicate last year’s numbers again.

The Redskins, who were supposedly in hot pursuit of [intlink id=”163″ type=”category”]Cullen Jenkins[/intlink], instead signed former Cowboys defensive end Stephen Bowen to a five-year, $27.5 million deal that includes $12.5 million in guarantees.

Anyway, the Redskins pursuit of Jenkins likely ended with that idiotic move.

The [intlink id=”35″ type=”category”]Minnesota Vikings[/intlink], our favorite franchise in the world, has been trying to dig out from under an eternity of ineptitude by throwing some money around as well.

Ayodele was decent last season, starting 16 games and recording 37 tackles and a sack.

The Queens also released safety Madieu Williams, who had 75 tackles and an interception in 13 starts last season.

The news wasn’t all bad for the Saints.

They re-signed tackle Jermon Bushrod to a two-year deal. That’s significant not only because Drew Brees gets one of his protectors back, but because the [intlink id=”13″ type=”category”]Chicago Bears[/intlink] were also targeting Bushrod.

Meanwhile, the Bears opened the day with flurry, signing… punter Adam Podlesh to a five-year deal.

Leave it to Lovie & Co. to start things off with a splash.

The [intlink id=”281″ type=”category”]Jacksonville Jaguars[/intlink], who have been revamping their defense, added another component, signing linebacker Clint Session to a five-year, $30 million deal.

The former Colts linebacker played in only five games last season, but had 103 tackles in 14 games in 2009.