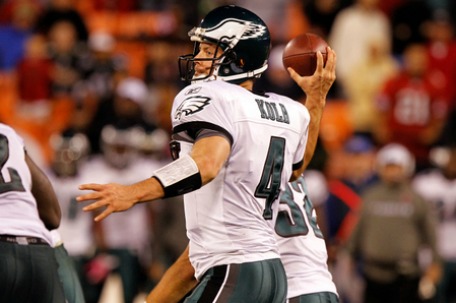 Kolb will have his chance to start soon.

Although teams can’t begin signing free agents until Friday, this is the second day they could negotiate with them. Several clubs took advantage and reached agreements with players.

The Green Bay Packers jumped into the fray by reaching an agreement with Mason Crosby.

Here are today’s developments that could impact the Packers’ quest to repeat in 2011.

We will update as more come through.

The McNabb deal did get done after all. The Vikings gave up a sixth-round pick in 2012 and a conditional pick in 2013.

Oh, and the Vikings? Well, they still scare pretty much no one.

Here’s a big one. The Minnesota Vikings lost their top receiver Sidney Rice to the Seattle Seahawks.

Word is Rice’s deal is for five years and $41 million, with $18.5 million guaranteed.

That’s some serious loot for a guy with one 1,000-yard season.

More importantly, whoever ends up playing quarterback for the Vikings has one less weapon.

Breaston will team with Dwayne Bowe to form a potent, 1-2 punch. He’ll also be reunited with former Cardinals offensive coordinator Todd Haley, who’s now the coach of the Chiefs.

Breaston’s deal is for five years.

Something tells me James Jones is off the market next.

Eagles backup quarterback Kevin Kolb is expected to be traded to the Arizona Cardinals sometime this week. The Eagles will get cornerback Dominque Rodgers-Cromartie and a draft pick.

The move makes both teams stronger. The Eagles needed a corner to pair with Asante Samuel and the Cardinals needed someone to get the ball to Larry Fitzgerald.

The deal should be done by the end of the week.

The deal is supposed to be finalized today, but we’re still awaiting word.

The New York Jets, who are looking a lot like the AFC’s best, locked up receiver Santonio Holmes for five years.

Holmes got $50 million with $24 million guaranteed.

Quarterback Matt Hasselbeck found a new home today. He’ll be joining the Tennessee Titans to be a placeholder until rookie Jake Locker is ready.

The Titans will also be dumping Vince Young on Thursday, when players can officially be released.

As for Hasselbeck’s old team, the Seattle Seahawks, they’re going with Tarvaris Jackson and Charlie Whitehurst. It was reported they had signed Matt Leinart yesterday to compete with Jackson and Whitehurst, but today it was revealed Leinart will re-up with Houston for a chance to back-up Matt Schaub.

The Carolina Panthers probably aren’t going to compete with anyone this season, but they did re-sign running back DeAngelo Williams.

It’s not all bad news for Seattle.

They did sign guard Robert Gallery, which should improve their atrocious offensive line.

In San Diego, the Chargers re-signed the top safety on the market and one of their best defenders — Eric Weddle, who’s now the highest-paid safety in the NFL.

Weddle got $40 million over five years, with $19 million guaranteed.

If San Diego can improve their special teams, they’re the Packers of the AFC.

The Saints can plug just about any receiver into that offense and make him look good, but Moore is one of Drew Brees’ more consistent options.

Cincinnati did something about the mess they have at quarterback by signing former Raider Bruce Gradkowski.

With Carson Palmer seemingly out of the picture, Gradkowski will likely hold down the fort until rookie Andy Dalton is ready to step in.

Gradkowski was 83-of-157 for 1,059 yards, five touchdowns and seven interceptions with the Raiders last season. He started four games.

And finally, here’s some big news from the Vikings.

Aromashodu sat in Mike Martz’s doghouse in what should have been his breakout season in Chicago, last year. He’ll likely get some decent opportunities with the Vikings and if that’s the case, they might have something.

Aromashodu was the Bears best receiver in the second half of 2009, before Martz became their offensive coordinator.

He’ll get $15 million over three years.

Like Ike Taylor, who was re-signed by the Steelers yesterday, the Lions were rumored to be interested in Florence. Cornerback is Detroit’s weakest area.

There are still a few solid guys on the market, though — Johnathan Joseph, Antonio Cromartie and the big prize, Nnamdi Asomugha.

The Lions have said they won’t pursue Asomugha because of his salary demands, however, so they’re probably going to have to overpay Joseph or Cromartie.

The 37-year-old former Packer got a four-year deal worth $12 million, with $3.5 million guaranteed.

Previous Article
Packers Give Crosby Five-Year Deal
Next Article
With Colledge Likely Moving On, Bulaga Could Move To Left Guard