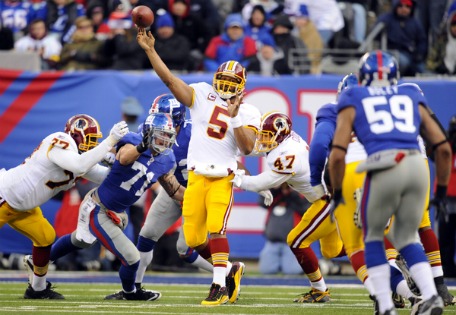 Probably going from one shit team to another.

Although teams can’t begin signing free agents until Friday, they were able to negotiate with them beginning today. Several clubs took advantage and reached agreements with players.

Of course, the Green Bay Packers were not one of those clubs. That being said, some of today’s player movement will impact the Packers and their quest to repeat in 2011.

Here are the important developments. We will update as more come through.

The [intlink id=”35″ type=”category”]Minnesota Vikings[/intlink] have had discussions with the Washington Redskins about a trade for Donovan McNabb. At one point, the deal was said to be done, pending McNabb agreeing to a new contract. Later, it was reported the Vikings and Redskins had not agreed on compensation.

A source with knowledge of the discussions tells us that, while a trade may indeed happen, the report of a deal being in place between the Vikings and Redskins is premature. Per the source, no agreement has been reached on the compensation the Redskins would receive.

The Vikings see McNabb as a stopgap solution while rookie Christian Ponder learns the offense. We fully expect this deal to get done. We also fully expect the Vikings to finish last in the NFC North with or without McNabb.

Former Packers quarterback Matt Hasselbeck is leaving the Seattle Seahawks. There have been separate rumors of him signing with Tennessee and Oakland.

Once the Seahawks learned of Hasselbeck’s intentions, they went out and signed former Vikings quarterback Tarvaris Jackson and former Cardinals and Texans quarterback Matt Leinart, who played for coach Pete Carroll at USC.

Jackson and Leinart will compete with Charlie Whitehurst for Seattle’s starting job.

The Carolina Panthers took one of the top pass rushers off the market by re-signing Charles Johnson to a six-year, $72 million deal that includes $30 million in guaranteed money.

Even though Devin Hester wanted the Chicago Bears to sign him, receiver Santana Moss re-signed with Washington.

There wasn’t much doubt about this one, considering Moss wanted to return and Washington wanted him back. He got a three-year deal worth $15 million.

Not bad for a 32-year-old receiver.

The 49ers brought back former No. 1 overall pick Alex Smith on a one-year deal.

Smith can effectively be penciled in as the team’s starting quarterback this season, while rookie Colin Kaepernick develops.

The deal is reportedly worth $5 million.

The Jaguars, who are looking to retool their defense, are reportedly going to sign former Bills linebacker Paul Posluszny.

Posluszny is a tackling machine, who racked up 151 stops last season, and a major upgrade for the Jaguars.

And guess who was the first team to contact the prize of the free agent market, former Raiders cornerback Nnamdi Asomugha?

If you said the New York Jets, you win a chicken dinner.

New York would appeal to Asomugha both as a contender and because he wants to become an actor after football. It would also give the Jets the two best cornerbacks in the league with Darrelle Revis on the other side.

The [intlink id=”126″ type=”category”]Detroit Lions[/intlink] will go to camp with two kickers.

The team re-signed Dave Rayner, who took over for long-time kicker Jason Hanson after he got injured last year. Rayner signed a one-year deal.

The San Diego Chargers signed former 49ers linebacker Takeo Spikes, who will play inside and shore up one of the weakest areas of their defense.

The Chargers had been a rumored landing spot for Nick Barnett.

If I were Ted Thompson, I’d be putting in calls to Buffalo and San Francisco to see if they want Barnett.

One of the second-tier cornerbacks is off the market. The Pittsburgh Steelers re-signed Ike Taylor to a four-year deal.