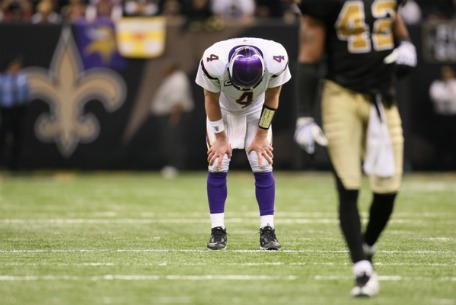 Not that anyone needs to help out in this department because it always has a life of its own, but NFL.com’s Gil Brandt has opened the door on the possible return of one [intlink id=”41″ type=”category”]Brett Favre[/intlink]… again.

Brandt says Favre might be getting the itch again, but this year things are a little different.

“I do think Favre would be interested in talking to a team about returning,” Brandt said. “But I don’t see a team out there right now that would bring him back as a starter.”

The [intlink id=”35″ type=”category”]Minnesota Vikings[/intlink] have seemingly moved on, drafting Florida State’s Christian Ponder in the first round of the NFL Draft.

“Brett is still a good quarterback, but I’d consider him a descending quarterback,” Brandt said. “It’s awfully hard for him to go to a team and be a backup. The Vikings must start Christian Ponder this season to get him some experience. And they’re not going to get Favre in there to babysit Ponder.”

As we all know, Favre doesn’t babysit. It’s part of the reason he and [intlink id=”25″ type=”category”]Aaron Rodgers[/intlink] don’t have much of a relationship.

There was also a completely unsubstantiated rumor the [intlink id=”249″ type=”category”]Carolina Panthers[/intlink] were interested in Favre, but they drafted Auburn’s Cam Newton No. 1 overall.

Even if Favre does get the itch to return, it seems unlikely anyone will want him, except perhaps as an in-season injury replacement.

That scenario would allow Favre to skip training camp, which he hates, and rest his body even longer than normal. It’s a possibility that can’t be ruled out.

Previous Article
We Lose Games In 10 Days
Next Article
Underwood Up To No Good: Part 2