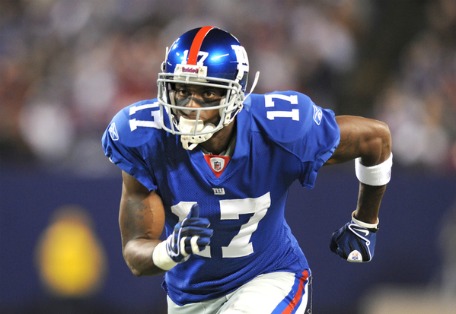 Plaxico may end up in purple.

Two of the [intlink id=”35″ type=”category”]Minnesota Vikings[/intlink] main offensive weapons, running back Adrian Peterson and receiver Percy Harvin, are lobbying for the team to sign receiver Plaxico Burress, who was released from prison earlier this month.

“I think he’s one of the best receivers to play the game,” Harvin said, “so I would love to have him and get the opportunity to learn from him as I did [Randy] Moss and some of the other veterans I’ve played with.”

Burress hasn’t played football since 2008 after pleading guilty to gun charges and will be looking for a new home to resume his career when the lockout ends. Whether Minnesota is that place remains to be seen, but there are some signs that make the possibility one to keep an eye on.

Obviously, Burress is an ex-convict, so he’ll fit right in.

Then there’s the status of the team’s top receiver Sidney Rice, who will be a free agent once the lockout ends. If Rice signs elsewhere, the Vikings will have a huge hole in their lineup to fill.

Even if the team brings Rice back, they got hardly any production from any receiver other than Harvin in 2010 and could use Burress as a solid third option. Burress has topped 1,000 yards receiving four times in his career.

Thankfully for the rest of the [intlink id=”527″ type=”category”]NFC North[/intlink], regardless of what the Vikings do, they still look like the fourth-best team in the division. Their defense is aging and they’re ready to trot out a rookie quarterback when the season opens.