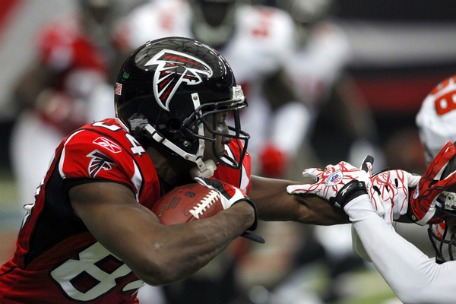 [intlink id=”127″ type=”category”]Atlanta Falcons[/intlink] receiver Roddy White thinks his team is going to outscore everyone in 2011 after the team added receiver Julio Jones in the draft.

The Falcons are not going to outscore the Green Bay Packers, the team that whipped them 48-21 in the playoffs. Not only are the Packers deeper on offense, but they’re stronger on defense.

Of course, after saying the Falcons are going to outscore everyone, White went on to essentially agree with my assessment, calling the Falcons ‘Green Bay South.’

“We’re going to outscore everybody,” White said. “Green Bay’s got, what, four or five guys out there who can make plays? We’re going to be Green Bay South.”

Previous Article
Vikings Probably Aren’t Going Anywhere
Next Article
Lockout Could Be Over Soon: The Details