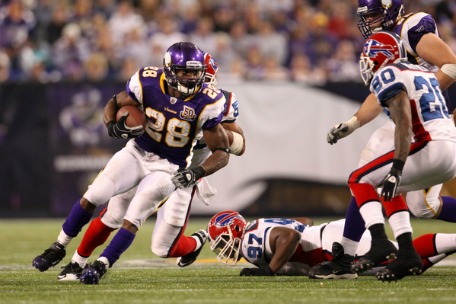 Always there for the kids.

We’d expect nothing less from a member of the [intlink id=”35″ type=”category”]Minnesota Vikings[/intlink].

I guess they’ll have to call it the Old Spice Adrian Peterson Football Camp* now.

PLEASE NOTE! Adrian Peterson is being featured on the NFL Top 100 program and will not be able to attend this week’s camp. Although we are saddened to hear that he won’t be able to attend his camp, we congratulate Adrian on the honor. Since we learned the news, ProCamps has been working around the clock to maintain a program that still provides a first-class experience to all campers and allows interaction with various Sooner stars. All-time Sooner greats Mark Clayton, DeMarco Murray and Jason White will serve as special guest hosts at camp.

He had a hell of a pro career.

I don’t know about you, but I’d be pissed if I forked over some dough to play ball with Adrian Peterson and they gave me Jason White instead. And then, on top of it, the douche who was supposed to be there lies about his reason for skipping the event?

The Minnesota Vikings never cease to amaze me.