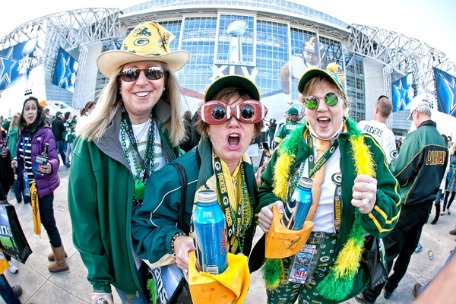 Some of the thin-skinned celebrating at Super Bowl XLV.

MADISON – In what anthropologists and health care professionals are calling an unprecedented and historical breakthrough in medical science, a University of Wisconsin study reported in this week’s Journal of the American Medical Association claims that Green Bay Packer fans have “genetically cultivated –- over a long period of time –- the most significantly diaphanous epidermis of any (quasi) biped within the hominid taxonomic spectrum.”

In layman’s terms, science has finally proven what the outside world has known all along: Green Bay Packer fans have the thinnest skin of any human species ever known to man.

“The average human has 4 to 5 outer layers of skin, depending on the body part,” says Dr. Karl Schmidt, Executive Director of the Wisconsin Institute of Dermatology, and primary author of the study. “The average Packer fan has only one delicate layer of skin. And, indubitably, that layer smells funny.”

“Watch as I conduct a standard Patellar Reflex Test on this prototypical Packers fan. Some of the thickest skin on your body is on the knee, so I’ll hit her there with this mallet. Her reaction will be immediate and completely instinctive,” Dr. Schmidt explains as he strikes the patient’s knee.

“OUR FANS OWN THE TEAM,” the patient screams, while holding a kielbasa stuffed with a cheeseburger Hot Pocket stuffed with another, smaller kielbasa.

Each strike of the mallet elicits a different reaction, but each reaction is equally shrill and slurred.

“HOW MANY SUPER BOWLS HAS YOUR TEAM WON?”

“WE STAND THE WHOLE GAME. NO OTHER FANS DO THAT.”

Although the study is historically significant, researchers are unsure what to do with the information. They do advise all Green Bay Packer fans to take extra safety measures in protecting their fragile skin from tears and cuts.

“Avoid internet chat rooms,” cautions Dr. Daniel Currie, Chief Resident of the Milwaukee County Hospital and Veterinary Service Center. “Your skin is at its thinnest when the outside world refuses to recognize how superior your football players, coaches, fans, stadium, uniforms, history, Hall of Fame, broadcasters, cheerleaders, and tailgating are to the rest of the league. Also, keep your skin well moisturized. Gravy is not a skin moisturizer, people. I cannot stress that enough. Country gravy is no exception, so stop asking me that. Geez Louise.”