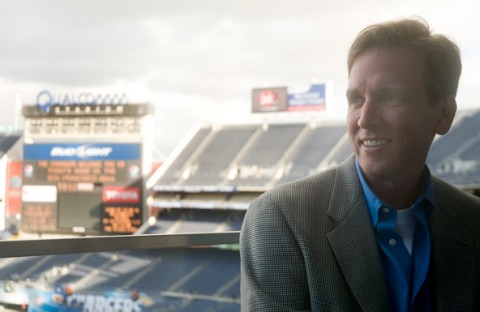 Farmer is seriously keyed in and he doesn’t make you want to stab yourself in the eyes when you read his work, like, say, a certain Sports Illustrated writer.

In addition to being all over the lockout, he’s the source when it comes to Los Angeles’ efforts to land itself an NFL team. He’s also a Wisconsinite by birth with a serious affinity for Mars’ Cheese Castle.

We asked him to give us the dirt on the lockout, who’s going to end up playing in L.A. and the destination of a particular free agent cornerback.

What do you make of the current talks between the league and players?
I’m hopeful they’ll result in a CBA, but I don’t think anyone can say for sure — even the people in that room.

What happens if, as expected, the NFL wins its appeal in the 8th Circuit?
If mediation doesn’t produce an agreement, and the NFL wins in St. Louis, I think there’s a very good chance at least a couple weeks of games are canceled, if not more.

You said a few weeks ago you think there’s a 70 percent likelihood games will be lost. What do you base that on?
That’s down slightly from the 75 percent likelihood I’ve held onto for a while, so I’m actually feeling a bit more optimistic about the situation. I base it on the people I speak with who are a lot closer to the negotiations than I am.

Your best prediction on how and when the lockout ends.
I’ll stay positive, keep my fingers crossed, and say a deal is struck sometime in July. I don’t think that’s the most likely scenario, but it’s the one anybody who wants football should want.

Okay, it sucks talking about the lockout, so let’s move on. You were born in Madison. How the hell did you end up in L.A.?
My dad worked for IBM, then Xerox — he got his PhD in Physics from Wisconsin — so we moved all over the country. I went to high school and college in L.A., then worked at newspapers up and down the West Coast after I graduated. When the L.A. Times came calling in 2000, that brought everything full circle and I jumped at the chance to come back.

Speaking of, how does a city with no NFL team have a newspaper with an NFL writer?
Even though L.A. doesn’t have a team, the NFL is hugely popular here, just like it is everywhere in the country. L.A. is the Ellis Island of NFL fans — every team is well represented.

Do you hold any allegiance to a certain Green Bay-based football club?
My dad’s a Packers fan, my mom’s a Steelers fan, my brothers are either fans of the Redskins or (Baltimore) Colts, so I get pressure from all sides. I grew up a Redskins fan, having lived in Maryland for several years as a kid, but I now root for the best stories and against overtime games that have me bumping up against deadline.

What do you think of when you think of Wisconsin?
I think of Mars’ Cheese Castle, the main reason I fly into Chicago and drive to Green Bay for Packers games, rather than flying directly into Austin Straubel.

Nice! Let’s get back to L.A. Los Angelenos didn’t really support the NFL teams that played there previously. What makes anyone think it will be different next time?
Nobody can guarantee it will be different. Even though there are millions of NFL fans in Southern California, I don’t know that there’s an overwhelming appetite for L.A. to have its own team. Unless you’re pushing a stadium proposal, that is.

There’s a rumor Rush Limbaugh might be interested in buying the Vikings and moving them to L.A. Any credence to that?
That’s jumping ahead three steps. The challenge, and one that might never be overcome, is how do you finance a stadium on 10 games a year and an occasional Super Bowl when there’s no public money? This isn’t like the old days of the NFL, when a team like the Raiders or Rams would uproot and move to a new city for a cash offer. It’s about the stadium and the revenue that generates. That’s the economic driver that separates teams like, say, the Seahawks and the Chargers.

We keep hearing about the Minnesota Vikings and L.A. What are the chances?
I think the Vikings will get a deal done in Minnesota and stay. The NFL doesn’t want that team to leave.

If the scenario did play out, how would you see the divisions being realigned?
No relocation would be frictionless, but the easiest move in terms of divisional alignment would be the Chargers moving north. Incidentally, that’s the most likely team to relocate to L.A., at least at this particular snapshot in time.

Alright, let’s get to the rapid-fire questions. When do you see the NFL returning to Los Angeles?
April 23, 2016.

Clay Matthews or Troy Polamalu?
I’ll take both. Troy’s headed to Canton, and Clay has certainly pointed himself in that direction. Now, Clay has to prove he can do it season after season.

Aaron Rodgers or Brett Favre?
See above, although you’ve got to like the way Aaron handled the transition. He stayed above the fray, which couldn’t have been easy at all.

Any idea where Nnamdi Asomugha might end up?
Maybe he’ll wind up in Seattle.

Popular answer. Which teams are going to underperform?
Just about everybody in the West.

Finally, I know we’re a long way away from this, but based on what we know right now, give me your Super Bowl teams and winner.
We’re going to have a Super Bowl? See, that’s a good sign already.

I suppose it is.