You Are Ranked In ESPN’s Power Rankings 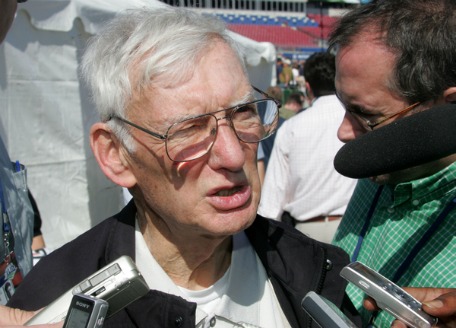 He may not look it, but Steelers chairman Dan Rooney carries weight.

Okay, maybe you’re not ranked and maybe you are, but you probably at least know someone who’s ranked in the latest edition of ESPN’s power rankings.

The worldwide leader ranked the top owners in the NFL this week, and the Green Bay Packers, who are publicly owned by more than 100,000 stockholders, came in third.

The Rooney family received all first or second-place votes in the survey and they are absolutely deserving of the first-place honor. The Steelers are one of the gold standards when it comes to NFL franchises — they’re stable, they’re successful, they do things the right way, and they have loyal, passionate fans.

Much of that can be attributed to the way the organization is run.

As for second place, Kraft only received one first-place vote, while Packers’ owners received three.

Kraft finished four points ahead of the Packers’ stockholders.

How could that be, you ask?

Well, one John Clayton, who hails from Pittsburgh, left Packers owners off his ballot. He was the only voter to do so.

“I couldn’t vote for the Packers because it is a community ownership, not a normal ownership,” Clayton said. “It’s not as though one owner makes the decisions and has to stand up for the praise or criticism. Assigned the chance to vote for ownership, I felt more comfortable voting for individual owners or family owners.”

This isn’t the first time Clayton has pulled some homer bullshit, either.

In 2008, ESPN chose the best fans in the NFL, as voted by their eight divisional bloggers. Steelers fans and Packers fans tied with four votes each, so ESPN did the logical thing and brought in the totally unbiased Clayton to break the tie.

Guess who he voted for?

Frankly, these power rankings mean nothing, just like John Clayton’s credibility, so they’re not worth getting bent out of shape about.

Who finished first in that contest, again?