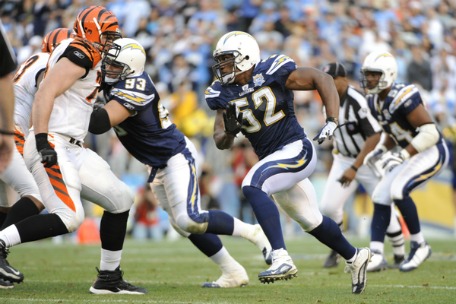 The Packers defense wouldn't be the same with this guy.

Prior to the 2009 NFL Draft, there were a lot of whispers the Green Bay Packers were interested in outside linebacker Larry English of Northern Illinois.

Sports Illustrated’s Don Banks suggested the Packers were considering English with the No. 9 overall selection. Meanwhile, the Press Gazette’s Pete Dougherty spoke at length about English’s potential during one of his draft previews.

All signs pointed to the Packers having a real interest in English and had they taken him, this would be a whole different team.

Things played out for the best, though. The Packers selected nose tackle [intlink id=”473″ type=”category”]B.J. Raji[/intlink] with the No. 9 pick. English went to the San Diego Chargers at No. 16, which was a surprise to many.

The Packers landed their outside linebacker by trading back into the first round and choosing [intlink id=”454″ type=”category”]Clay Matthews[/intlink] with pick No. 26. We all know how this worked out for the Packers, but let’s say things turned out differently.

What if the Chargers tabbed Matthews at No. 16 or the Packers chose English at No. 9 like Banks suggested? It’s unlikely the Packers defense would be as good as it is today.

In two seasons in San Diego, English has 53 tackles, five sacks and one forced fumble in only four starts. Although he’s been plagued by foot problems, English has deservedly been labeled a bust.

Matthews, on the other hand, is on the opposite end of the spectrum. In his two seasons, Matthews has 111 tackles, 23.5 sacks, an interception, three forced fumbles and two touchdowns.

It just goes to show how a simple twist of fate could change the fortunes of an entire organization.