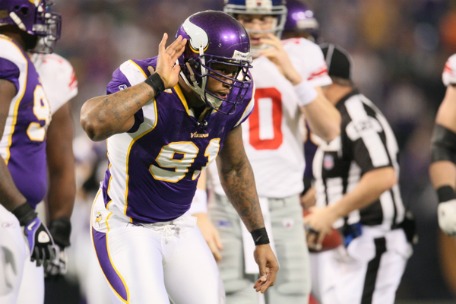 Where's the love? Not in Minnesota, apparently.

In yet another showing of just how much the [intlink id=”35″ type=”category”]Minnesota Vikings[/intlink] suck, defensive end Ray Edwards told the media this week he’d rather be a boxer than play for the team next season.

Edwards made his professional boxing debut Friday night and thinks he has a better future in the ring than on the field. Really, we’re talking about the Minnesota Vikings here, so who could blame him.

“I’ve openly said I won’t play for the Vikings, because of the simple fact of my backup is getting paid 70 more percent than I am — there’s no way I can do that to myself,” Edwards told 1500 ESPN Twin Cities. “I’d rather do what I love doing. I love doing football as well. But if there’s nobody that’s going to trade for me, I will be definitely focusing on boxing.”

Edwards is referring to Brian Robison, who has a three-year, $14.1 million contract.

Edwards isn’t currently under contract, and as a player with five years of NFL experience, it won’t be clear whether he’ll be a restricted or unrestricted free agent until a new collective bargaining agreement is signed.

If he’s a restricted free agent and the Vikings don’t pony up, it sounds like he’s serious about taking his talents elsewhere.

We’ve already said the Vikings are positioning themselves to be negatively impacted by the lockout, and a distraction like this can only add to their troubles.

It really does beg the question: does anyone in the Minnesota Vikings front office know what the hell they are doing?