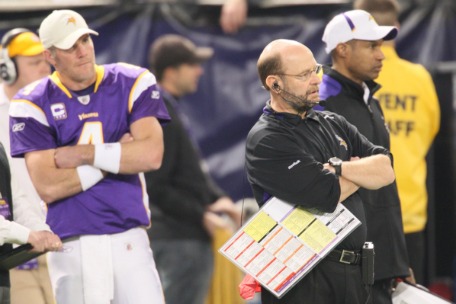 There’s not much we enjoy more around these parts than making fun of that joke of an organization known as the [intlink id=”35″ type=”category”]Minnesota Vikings[/intlink].

Their debacle of a 2010 season was fitting for so many reasons and frankly, it couldn’t have happened to a greater group of people.

Thanks to Fly Over Entertainment, we’ll soon be able to relive the Vikings’ 2010 season in all its glory. Highlights include, the idiotic trade for Randy Moss, the firing of their shit-for-brains coach, the appearance of Brett Favre’s tiny penis and the gaping hole in their pathetic stadium. That’s right, the documentary Skol, chronicling the Vikings’ 2010 season, will be released on May 19.

What’s wonderful and completely appropriate is the film was made by Vikings fans, who are some of the most ignorant individuals to ever wander the earth. I wonder who their target audience was, Green Bay Packers fans?

I also love that the movie is called Skol, which is what dipshit Vikings fans often yell at each other when they’re getting lathered up to watch their crappy team lose.

“Tap that keg a Busch. I’m a gonna need a cold one when a git done hittin’ dat shit.”

The documentary features interviews with Vikings fans, who basically blather on about how great Vikings fans are, hold their O’s far too long and make you want to jam a steak knife in your ears.

However, getting to point and laugh at these tools once again will probably make watching Skol totally worthwhile.