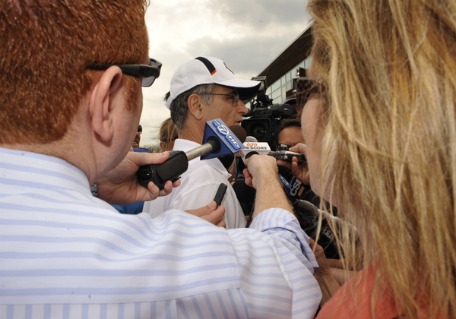 Angelo: Getting trustworthy tattooed across his forehead.

Actually, it’s not the Bears whole organization that’s a joke, it’s general manager Jerry Angelo, which should come as a surprise to no one.

If you watched the first round of the [intlink id=”1476″ type=”category”]2011 NFL Draft[/intlink], you saw Angelo’s ineptitude in action, although you probably couldn’t tell what was really going on.

We now know the Chicago Bears are the reason this happened.

The Bears, who owned pick No. 29, tried to trade up to No. 26 to select Wisconsin offensive tackle Gabe Carimi, who they thought the Chiefs were eyeing. Everyone agreed on the trade, the Ravens submitted it to the league office and the Bears… didn’t.

Specifically, Angelo and his team didn’t.

Angelo had this to say afterward: “I am a complete douchebag and have no idea how to be an NFL general manager.”

Actually, that’s not true. That’s what he should have said.

Instead, he said this.

“We had a disconnect and there might be something said about it because of not communicating with the league and proper protocol, that was my fault,” Angelo said. “I called Baltimore and apologized to Baltimore and told them it was our fault. They did everything according to the rules and we thought we were following everything and we just ran out of time. It was a glitch on our part and that glitch obviously was under my reign.”

Anyway, this isn’t the first time Angelo revealed his colors on draft day. During last year’s draft, Angelo decided to take Buffalo running back James Starks in the sixth round. Former Bears’ director of college scouting Greg Gabriel actually called Starks and told him he was the pick.

Then Angelo popped in and told Gabriel he changed his mind and was going with someone else, even though the calls to Starks and his agent had already been made.

Understandably, Gabriel was not happy about the situation.

I then had to tell the player that in fact we were not drafting him. Hearing a kid go from being extremely excited to silence was not easy. It was the most embarrassing moment I had experienced while scouting.

In my mind everything is about integrity and I felt our integrity had been damaged. We had told a player and his agent that we were going to draft him and then backed out of the deal.

While Angelo’s change of heart was good news for the Green Bay Packers, who drafted Starks several picks later, it’s telling about the asshat who’s running the Bears’ football operations.

Let’s be honest. Can anyone really say this year’s draft snafu was just a mistake on Angelo’s part and be 100 percent certain?

Maybe Angelo had another change of heart, decided he didn’t want to trade with the Ravens and figured the best way out of it was to make a “mistake” and not call the NFL to report the trade.

Angelo has been the Bears GM since 2001. He spent the previous 14 years as director of player personnel with the [intlink id=”68″ type=”category”]Tampa Bay Buccaneers[/intlink]. Are we really to believe someone with that many years of NFL front office experience doesn’t know how trades work on draft day?

If that’s the case, the Bears have a bumbling idiot for a general manager.

While I may have strong feelings of disdain for your team, Chicago, you’re not the Minnesota Vikings. You’re a pillar franchise in the NFL. You’ve won a Super Bowl.

Get your shit together!

The topper on this crap sundae is commissioner Roger Goodell encouraged the Bears to compensate the Ravens for botching the trade. Angelo, being the upstanding individual he is, declined.

Goodell has no authority to make anyone do anything in this situation, but Angelo would have been wise to make good.

Some might say there’s a pattern of fallibility developing in Chicago.

I’ll take a stab and say the rest of the NFL probably isn’t keen on dealing with that.