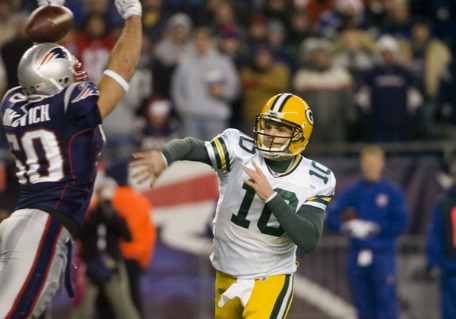 Flynn might be with the Packers longer than expected.

Green Bay Packers backup quarterback [intlink id=”84″ type=”category”]Matt Flynn[/intlink] may eventually end up playing for another team, but he sounds content to stay in Green Bay at the moment.

Flynn’s name consistently comes up in trade rumors and has since he got his first NFL start in week 15 of the 2010 season and threw for 251 yards and three touchdowns. While the Packers have expressed an interest in keeping Flynn, he’s entering the final year of his rookie contract and would like a shot to start.

He doesn’t seem too worried about if or when that’s going to happen, though.

“I don’t know. I really haven’t been paying too much attention to it,” Flynn said. “The whole labor issues, just kind of been focusing on that. Who knows what the deal is. I love being a Packer and I’ll be here as long as they want me.

“It’s all kind of speculation right now, of what people want to write or whatever they want to say. You can’t say that anybody wants me or doesn’t want me. We’ll see what happens. I just like where I am right now.”

That doesn’t exactly sound like a guy clamoring for a ticket out of town, but you wouldn’t expect Flynn to be that guy either.

Something will eventually have to give. In all likelihood, Flynn will be a restricted free agent in 2012, pending the outcome of the new collective bargaining agreement.

The Packers can give him a high tender, forcing any team who signs him to give up one or more high draft picks. Such a move may essentially limit Flynn’s opportunities in free agency, unless a team thinks he’s worth a first-round pick, but the Packers would have to pay him more than $2 million per season.

Obviously, the other option would be to trade Flynn, but if that doesn’t happen this offseason, it seems unlikely it would happen next year because of his free agent status.

The other question in this scenario is compensation. It’s tough to see any team paying more than a third-round draft pick for Flynn.

So, the Packers have to ask themselves if Flynn is more valuable than a mid-round draft choice.

My guess is they think he is.