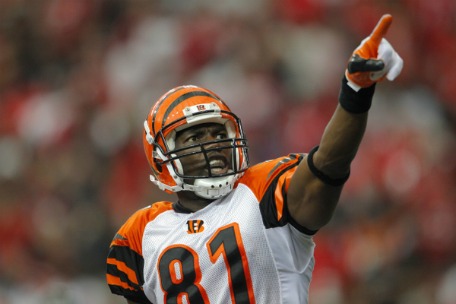 Owens brings something the Bears lack.

It’s one of the reasons they’re the second-best team in the [intlink id=”527″ type=”category”]NFC North[/intlink], despite what last year’s regular-season record and Brian Urlacher’s pea brain say.

After not addressing it in the draft, the Bears will have to turn to free agency to upgrade a position that currently features Johnny Knox, Earl Bennett and Devin Hester. While those guys bring some speed to the table, none of the trio would likely be considered anything more than a No. 2 guy anywhere else in the league.

There are two somewhat-intriguing options that will be available when the NFL offseason begins, both of whom have been the guy. Of course, they both come with a little baggage.

Terrell Owens, who will be an unrestricted free agent, showed he still has something left during his one-year stint with the [intlink id=”86″ type=”category”]Cincinnati Bengals[/intlink]. Owens caught 72 balls for 982 yards and nine touchdowns, all which lead the team.

Owens would give Cutler the big, strong receiver he hasn’t had since teaming with Brandon Marshall in Denver, a point NFL Network’s Brian Baldinger made last week.

Of all the receivers available, I think Terrell Owens makes the most sense to help the Bears. He can still play and can still be a No. 1 receiver. He’s a threat with the ball in his hands, knows what being a go-to guy is about and will work hard.

The downside of signing Owens is he’s a me-first guy who can be a distraction to the team. That might not be a big issue in a veteran locker room like the one in Chicago, though.

Another guy looking for another chance is former [intlink id=”298″ type=”category”]New York Giants[/intlink] receiver Plaxico Burress, who is finishing up a two-year prison sentence after pleading guilty to a weapons charge.

Burress will be released on June 6 and will be free to sign with any team. He hasn’t played football since 2008, but is a four-time 1,000-yard receiver and at 33, probably has a year or two of productivity left. Like Owens, he’s a big, strong target and he’s probably hungry.

Neither player is a long-term solution, but the Bears offense would be a lot scarier with Owens or Burress on it.