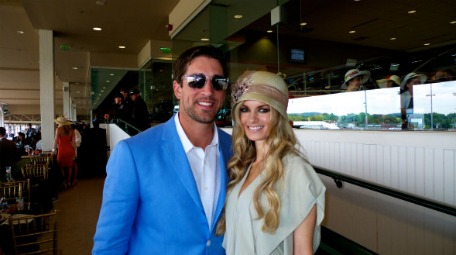 Green Bay Packers quarterback [intlink id=”25″ type=”category”]Aaron Rodgers[/intlink] took in the Kentucky Derby over the weekend, where he was spotted with none other than Victoria’s Secret model Marisa Miller.

Does that mean they’re together?

Does that mean people will make all kinds of assumptions?

Aaron Rodgers is a man about town and he’s usually about town with one of any number of hot broads — Jessica Szohr, Julie Henderson, Hillary Scott, Erin Andrews, that broad from Chico.

Here was Miller’s tweet about her supposed chance encounter with Rodgers.

@TheEllenShow I found our favorite NFL quarterback @AaronRodgers12 hanging out at the Kentucky Derby.

If nothing was going on between Rodgers and Miller before, well, there’s no reason it can’t be going on now.

And by the way, nice blue jacket, bro.