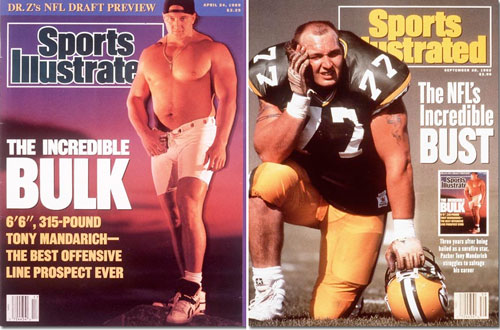 Those of us who sat through it know the 1980s was a terrible decade to be a Green Bay Packers fan.

I really can’t put the consistent level of ineptitude into words. It was embarrassing.

Some of the Packers’ picks boggle the mind. See Rich Campbell.

Where are they now? Here’s the third part in this series — the Packers biggest draft busts from 1980-1989.

Does it get any worse than this? My taint hurts thinking about it. The Incredible Bulk. The Incredible Piece of Shit. Mandarich came off like a prick before and after the draft. Bottom line is he didn’t want to be in Green Bay, but, as was the Packers M.O. at the time, they paid no attention to the warning signs. In the their defense, there’s almost no way the Packers could have selected anyone else with the No. 2 pick in the ’89 draft. Mandarich, by all accounts, was a once-in-a-lifetime offensive line prospect. Unfortunately, no one knew about the steroids and drug and alcohol addiction. The three players selected after Mandarich are Hall of Famers – Barry Sanders, Derrick Thomas and Deion Sanders. Mandarich played three seasons for the Packers. He sucked a fat fucking ass every one of them. He couldn’t pass block. He certainly wasn’t the guy pancaking fools at Michigan State. Mandarich sat out the 1992 season with a thyroid condition and was released by the Packers in 1993. To his credit, Mandarich managed to resurrect his career with Indianapolis, playing three years with the team from ’96 to ’98. He actually started one more game with the Colts than he did with the Packers (32 to 31). Since his retirement from the NFL, the native Canadian has done NFL analysis for The Score TV in Canada and has opened a photography studio in Arizona. He’s also written a book about his experience in football and overcoming his addictions – My Dirty Little Secrets – Steroids, Alcohol & God.

Anthony Dilweg (3rd round, 1989)
Hey, the guy went to Duke, so he obviously has something going for him. Football was not it, though. Dilweg played quarterback under Steve Spurrier and like most Spurrier guys, was awesome in college and terrible in the pros. Dilweg played two seasons for the Packers and threw for 1,274 yards in nine games. He also came to my junior high school and gave me a black-and-white photocopy of his autograph instead of the real thing. Fucking douche. But like I said, Duke, silver spoon, etc. Dilweg is the chairman of Dilweg Companies, a real-estate development company.

Keith Woodside (3rd round, 1988)
Woodside, a running back from Texas A&M, lasted four seasons with the Packers and gained a total of 976 rushing yards. Woodside actually wasn’t a terrible receiver in the pros – he did catch 59 balls and gain 527 yards in 1989 and 1,248 in his career. That being said, he was nowhere near average in any other facet of the game – less than 20 yards per return on kickoffs and less than 1,000 career rushing yards. He was waived prior to the 1992 season and has been MIA since then.

Brent Fullwood (1st round, 1987)
My God. Fullwood, an All-American running back from Auburn, was the fourth pick in the ’87 draft. Fullwood had a legendarily-low score on the Wonderlic, the intelligence test all players take at the NFL Scouting Combine. Although results weren’t released, it was reportedly between one and nine. Twenty is considered average. He also allegedly stopped attending classes shortly into the fall semester of his final year at Auburn. Fullwood played three full seasons for the Packers, his best coming in the magical 1989 season when he gained 821 yards and made the Pro Bowl. His career rushing total of 1,701 yards doesn’t exactly scream fourth-overall draft pick. Fullwood was traded to Cleveland during the 1990 season after he pulled himself from a game because of a sore throat and upset stomach. The thing I personally remember most about Fullwood is my father called him Fumblewood. His high intelligence level probably netted him some fantastic job after his pro career ended, but we’re not aware of what it might be.

Dave Croston (3rd round, 1987)
The tackle was one of the Iowa Hawkeyes all-time greats and of course he was one of the Green Bay Packers all-time worsts(?). Croston played one season for the Packers and started one game. Considering the success the Packers’ offensive lines had doing anything in the ’80s, that says something. Last we heard, Croston was in pharmaceutical sales for Pfizer.

Frankie Neal (3rd round, 1987)
Neal, a receiver from Fort Hays State, was selected with one of the picks the Packers acquired from the Raiders for Hall-of-Fame receiver James Lofton. Neal made exactly no one forget about Lofton. Frankly, Neal was such a piece of crap I couldn’t find any information about him, other than he played for the Packers for exactly one season. Career line – 36 receptions for 420 yards in 12 games, three of which were starts. We’ve gathered Neal had no discipline. He got picked up for shoplifting a pair of $23 shoes shortly after his NFL career was over.

Robbie Bosco (3rd round, 1986)
Bosco, like many BYU quarterbacks, threw for big numbers in college. He also lead the Cougars to their only national championship in 1984. Bosco would never throw a pass in the NFL, though. After spending his first two seasons on injured reserve, the Packers cut Bosco. He’s worked at BYU as a coach and administrator since.

Donnie Humphrey (3rd round, 1984)
Humphrey, a defensive tackle, was the first five-year lettermen in Auburn history. How? I don’t know, but they do a things a little different in the south, so just roll with it. That got him a three-year NFL career and a pat on the back. Humphrey started all 16 games his rookie season and a total of 11 the next two years. His career was plagued by weight problems, which eventually got him cut, and he spent a month in rehab for a cocaine problem. He registered three career sacks. Not much has been heard from Donnie Humphrey since he playing days ended. His seemingly one notable accomplishment after college, if you can tolerate women’s basketball, is he’s the father of Tasha Humphrey, who played briefly in the WNBA.

Dave Dreschler (2nd round, 1983)
The guard from North Carolina lasted all of two seasons with the Packers. After starting in 12 games his rookie season, Dreschler started only three games in 1984. His career was over by 1985. Dreschler has put his business degree to good use, though. He’s currently the business development manager, North America at HAAS Multigrind.

Del Rodgers (3rd round, 1982)
Rodgers, a running back from Utah, was the first 1,000-yard rusher in Utah history, but didn’t find such success in the pros. While he was moderately successful as a kick returner – the highlight being a 97-yard touchdown in 1984 – Rodgers never amounted to much as a running back in the pros. His Packers career amounted to 71 carries for 269 yards and one touchdown in 23 games. He finished his NFL career with the 49ers, whom he played eight games for in two seasons. Rodgers is now the sports director and an anchor at KCRA, the NBC affiliate in Sacramento.

Rich Campbell (1st round, 1981)
The Packers picked the Cal quarterback with the No. 6 pick in the 1981 NFL draft. He would play in only seven games for the team in four seasons. After Campbell’s rookie season, then-offensive coordinator Bob Schnelker famously saidCampbell had neither the arm strength or skill to play at the NFL level and would never play for him. In 1985, Campbell refused to report to minicamp and the Packers traded him to Oakland. He never played a game for the Raiders. After his NFL career ended, Campbell began working the newspaper circuit. He was the opinion page editor for the Hattiesburg (Miss.) American and he’s currently the Martin County (Fla.) columnist for Scripps Treasure Coast Newspapers.

Gary Lewis (2nd round, 1981)
The Packers drafted Lewis, a tight end, out of the NCAA football power University of Texas-Arlington. Good work. Lewis played four uneventful seasons for the team, starting a grand total of three games. His career stat line looks like something Jermichael Finley puts together in two weeks – 21 catches, 285 yards and one touchdown.

Ray Stachowicz (3rd round, 1981)
His name should be Stankowicz, because that’s what he did. The Michigan State punter almost made it through two seasons as the Packers punter. After punting all 16 games for the Packers in 1981, he kicked in nine games in the strike-shortened 1982 season. The Bears signed him for two games in 1983 and then… sorry, kid. In 27 games, Stachowicz averaged 40.2 yards per kick and had four kicks blocked. Hell, he was the top punter in college football as a senior, so you can’t blame the Packers for drafting him. We have no idea where Stachowicz is these days, unfortunately.

This is one part of a three-part series. Click the links below for the rest.