The Green Bay Packers have had their share of draft busts over the years. Some have been epic (Tony Mandarich), while others have snuck out of town almost unnoticed (Terrence Murphy).

Well, thankfully we’re here to dredge up your past failures, point our gnarled, crooked, judgmental fingers at you and cackle. For you’ve shamed the Green Bay Packers, you’ve shamed us and you’ve shamed yourselves.

You should be forced to relive our misery at this time every year.

We’re putting a little twist on the list of Packers draft busts, though. Not only are we here to point out your failings on the field, we’re here to tell people what you’re doing with your pathetic lives now.

Where are they now? Here’s the second part in this series — the Packers biggest draft busts from 1990-1999.

Fred Vinson (2nd round, 1999)
Vanderbuilt cornerback Fred Vinson was only a bust in the sense that he only played one season in the NFL. After a rookie campaign where he made one start, 19 tackles and two interceptions, Ron Wolf traded, natch, fleeced the Seattle Seahawks by sending Vinson to Seattle for running back Ahman Green. Vinson injured his knee the following preseason and never played a game for the Seahawks, while Green would go on to become the Packers all-time leading rusher. In the end, the pick worked out great for the Packers, but that doesn’t make Vinson any less of a bust, although the circumstances were out of his control. Vinson had a failed comeback attempt with the Carolina Panthers in 2002 and played with the Georgia Force in the Arena League during the ’04-05 season. He now lives in Orlando and does web design and Internet marketing. 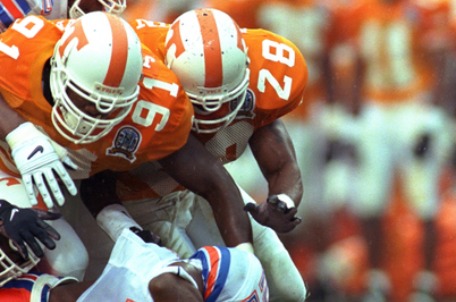 Brown: After college could only play on foreign soil.

Jonathan Brown (3rd round, 1998)
Brown, a defensive lineman from Tennessee, played in four games during his Packers career, which lasted only one season. He didn’t record any stats, which turned out to be a theme for his NFL career. Brown played part of the 1999 season with the Denver Broncos and part of the 2001 season with the St. Louis Rams. He didn’t record any stats at either stop. Brown did have some success in NFL Europe. In 2000, he had 10 sacks with the Berlin Thunder and in 2003 he had 6.5 sacks for the Amsterdam Admirals. After flaming out in the NFL, Brown actually went on to have a successful career in the CFL. He played for the Toronto Argonauts from ’04-09 and was twice named a CFL All-Star. He signed with the BC Lions in 2010, but isn’t currently listed on their roster.

Brett Conway (3rd round, 1997)
Conway, a kicker from Penn State, never played a game for the Packers after he was beat out for the kicking job by waiver-wire pickup Ryan Longwell. Although he remained on the Packers roster for the 1997 season, the Packers released Conway in 1998. He’d go on to kick for five NFL teams, but made it through only two full NFL seasons, both with the Washington Redskins. He last kicked in the NFL in 2003 with Cleveland. In 2005, Conway had a one-year stint with the CFL’s Winnipeg Blue Bombers. Conway currently lives in the Chicago area and runs a luxury vacation rental company.

John Michaels (1st round, 1996)
The big left tackle from USC started nine games for the Packers during his rookie season after veteran Ken Ruettgers went down with a knee injury. In ’97, he started the team’s first five games before suffering his own season-ending knee injury. The next year was more of the same – Michaels injured his right knee in training camp and never played another game for the Packers. He was traded to Philadelphia prior to the 1999 season, but was cut before it began. In total, the Packers got 14 starts out of Michaels. It looks like his post-NFL career will turn out to be more successful. Michaels graduated from USC’s Keck School of Medicine in 2008 and is doing his residency at the Baylor School of Medicine.

Derrick Mayes (2nd round, 1996)
When the Packers drafted Mayes, he was Notre Dame’s all-time leading receiver. That success never translated to the NFL. Mayes spent three seasons with the Packers, appearing in 29 games and starting only nine. His best season came in 1998, when he recorded 30 catches for 394 yards and three touchdowns. He would go on to play two seasons for the Seattle Seahawks before retiring from the NFL. Since his playing career ended, Mayes has been involved in the entertainment industry and real estate development. Perhaps most notably, he directed BET’s “The Ultimate Hustler” and was executive producer of “Irish Weekly.”

LeShon Johnson (3rd round, 1994)
Admittedly, Johnson had some shitty luck. After leading the nation in rushing his senior season at Northern Illinois with 1,976 yards, Johnson tore his ACL during his rookie year with the Packers. Five games into his sophomore campaign, the Packers released Johnson and he signed with the Arizona Cardinals. His Packers’ career consisted of 28 carries for 97 yards. Johnson actually had one decent year for Arizona in 1996, when he rushed for 634 yards and averaged 4.5 yards per carry, but he was out of football after the 1997 season, when he was diagnosed with Lymphoma cancer. He’d battle back to play one season for the New York Giants in 1999, before finishing his professional career with the XFL’s Chicago Enforcers in 2001. In 2005, Johnson was convicted of dog fighting in Oklahoma. He currently hosts football camps throughout the nation through his company All Pro Football Tours. 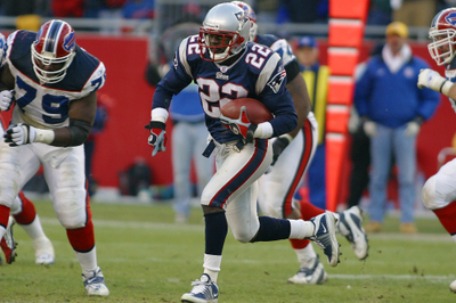 Terrell Buckley (1st round, 1992)
T-Buck. Even though the former Florida State cornerback played 14 seasons in the NFL, he lasted only three in Green Bay. Not exactly what you’re looking for from the fifth overall choice in the draft. What’s worse is the Packers chose Buckley over former Wisconsin cornerback Troy Vincent, who went two picks later, and turned into one of the league’s best over the course of his career. In Buckley’s case, it turned out a 5-10, 180-pound defensive back couldn’t effectively cover tall receivers and couldn’t tackle strong ones no matter how confident he was. Buckley, who would go on to play for five more teams, recorded 10 interceptions for the Packers before they traded him to Miami. He last played in the NFL in 2005 for the New York Giants. When his playing career ended, Buckley returned to Florida State, completed his degree and served the 2008 season as the team’s assistant strength and conditioning coach. He’s been trying to break into coaching since. Buckley never made a Pro Bowl in his 14-year career.

Mark D’Onofrio (2nd round, 1992)
The Packers had high hopes for the linebacker from Linebacker U, AKA Penn State, but they weren’t rewarded. D’Onofrio became a starter his rookie season, but never recorded a single statistic. He tore his hamstring that season and a year later his career was over. Fortunately, D’Onofrio still found success in football. He’s had assistant coaching jobs at Georgia, Rutgers, Temple and is currently the defensive coordinator/assistant head coach of the Miami Hurricanes.

Vinnie Clark (1st round, 1991)
Another Ohio State bust, Clark lasted only two seasons in Green Bay. During those two years, the cornerback started only 15 games and recorded four interceptions. Clark would play four more seasons in the NFL for three other teams. His NFL career ended when he was released by the Jacksonville Jaguars four games into the 1996 season. In 2005, Clark coached one season with the Arena League’s Colombus Destroyers. Since then, he’s apparently been coaching high school football.

Chuck Webb (3rd round, 1991)
The Tennessee tailback came to the Packers after playing only two seasons for the Volunteers. He missed nearly all of his junior season after tearing his ACL. He wasn’t much luckier in the pros. After holding out, Webb injured his knee again on his second day of practice. Webb would play only two games in his Packers’ and NFL career. He returned two kicks, but never rushed the ball. Word is, Webb now coaches pee-wee football and may own a construction company in his native Toledo.

Darrell Thompson (1st round, 1990)
Thompson finished his college career as the Minnesota Golden Gophers’ all-time leading rusher, but he was never anything close to a star in the NFL. The running back lasted five seasons in Green Bay, which probably speaks as much to the Packers’ atrocious running game as it does to Thompson. While he was strong, Thompson’s running style was so upright he was an easy target for tacklers. He finished with 1,641 yards rushing, eight touchdowns and a 3.5-yard average in his career. In 1991 and ’92, Thompson averaged an ugly 3.3 yards per carry. Thompson is currently the executive director of Bolder Options, a mentoring group for at-risk youth. He’s also still a legend in Minnesota sports history.

This is one part of a three-part series. Click the links below for the rest.